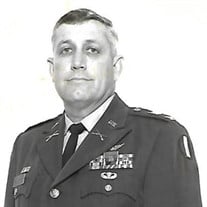 Colonel William Thomas McElrath October 30, 1933 – September 8. 2021 Colonel William Thomas “Bill” McElrath, 87, of Miami, Florida, passed away peacefully on September 8, 2021. A beloved father, grandfather, husband and uncle, he was born October 30, 1933 in Cedar Bluff, Alabama to William Coker McElrath and Mildred Wilson McElrath. William grew up in Cedar Bluff and Rome, Georgia. He graduated from the University of Georgia and completed graduate studies at Georgia State University and the University of Miami. He entered the United States Army in 1955 as an infantry officer and later became an Army aviator, retiring as a Colonel. His military service included tours of duty as Company and Battalion Commander, Air Cavalry Troop Operations Officer and Chief of infantry Officer, Worldwide Assignments Officer and Military Personnel Center. He was also a Professor of Military Science at the University of Miami. During his 24 years of active military service, William served abroad in Germany, Korea and two combat tours in Vietnam. He was awarded numerous military honors for his achievements and bravery, including two Legions of Merit, two Meritorious Service Medals, the Distinguished Flying Cross, two Bronze Star Medals (one for valor), five Air Medals, and the Gallantry Cross with Silver Star, presented by the Republic of Viet Nam for heroism under fire. Following his military retirement in 1979, William served as Assistant Dean for Undergraduate Studies in the School of Business Administration at the University of Miami for 20 years. He was responsible for the administration and academic counseling of over 10,000 undergraduate business students. In recognition of his excellence and dedication he was inducted into Iron Arrow, the highest honor attained at the University. He was especially proud of his work advising members of the University of Miami’s championship Miami Hurricanes football teams, many of whom were students in the School of Business Administration. An avid Hurricanes fan, William rarely missed one of their games and even traveled to away games with the team while employed at the University. Upon retirement, he traveled extensively with his wife, Gail, visiting seven continents and over 80 countries. Colonel McElrath resided in the South Dade area of Miami, Florida, since 1975, first in Cutler Bay and then in Redland, Florida. He loved his property in Redland and spent many happy days and hours there tending to his house and garden. His home was the location of innumerable joyous family occasions and parties over the years. In addition to being a courageous, decorated Army officer and respected academic, Bill will be best remembered as a family man – Dad to his kids, Papa and Grandad to his grandchildren and “The Colonel” to everyone else – who loved spending his time laughing, telling tall tales, making sure everyone was fed and enjoying the full, rich and well-lived life he created. William was predeceased by his wife Florine Leming McElrath, mother of his six children, who passed away in 1977, and his wife, Dr. Gail Hills, who passed away in 2016. He is survived by his children Ann (Terry); Richard (Kathleen); Mary Jane; Nancy (Tom); Catherine and Sarah (Ron) and his grandchildren, Dan (Meaghan) Caroline (Michael), Benjamin and Leah. Additionally, he is survived by his niece, Melinda (Bill) and her children, Haley and Rick, and four stepchildren: Rebecca (Joe), Rafael (Karen), Kerry (Neal) and Allison (Kyle), as well as his step grandchildren: Ian and Matthew; Sofia and Anthony; Megan and Fiona; and Liam and Declan. Colonel McElrath was a member of Silver Palm United Methodist Church in Homestead, Florida. Private services will be held at the South Florida National Cemetery at a later date. Please contact the family for details. When I’m gone Please don’t cry. Smile, because I was here! I may be gone physically, However, I’m with you always. If at times, things are not going so well Think of me…talk with me, Someway, somehow We will make it better. Treat everyone fair and true, Much more will be returned to you. There is nothing that can’t be made better. When you remember to use enthusiasm and love as your guide.

The family of WILLIAM THOMAS MCELRATH created this Life Tributes page to make it easy to share your memories.

Send flowers to the MCELRATH family.