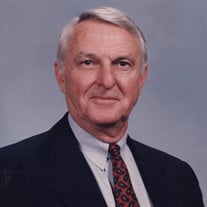 Thomas DeLancey Wood passed away peacefully at home on October 23, 2021 surrounded by his family. He lived a long and amazing life. He was a proud Miami native, born on September 26, 1931, the youngest son of Bernice Brandt Wood and Hayes Stearns Wood. He graduated from Ponce De Leon High School where he lettered in football, baseball, and was captain of the basketball team. He was also president of the student government. It was in high school where he met the love of his life, Virginia Woolley. They were married on June 30, 1956 at First United Methodist Church of Coral Gables. They created a beautiful love story together and were married for over 65 years. Tom obtained his bachelor’s degree at the University of Miami. While in college, he was the president of his class, president of the Sigma Alpha Epsilon Fraternity, and was in the Naval Reserves. In his sophomore year of college, his Naval unit was activated and he served during the Korean War. He continued to serve in the United States Naval Reserve, Judge Advocate General Corps for 40 years, and retired with the rank of captain. After his tour of service, he returned to the University of Miami and obtained his law degree in 1956. He remained dedicated to the University of Miami and served in many capacities. He served on the University of Miami Board of Trustees in various categories. He joined the board in 1987 and served for three years as the Alumni Association representative to the board. After sitting off the board for two years, he rejoined in 1992 as a Regularly-Elected Trustee, then served as Life/Senior Trustee from 2005 until his election as Emeritus Trustee in 2018. In addition to being past chairman of the Nesbitt Scholarship Committee at the UM School of Law, Tom was a member of the Iron Arrow Honor Society, the highest honor attainable at the University. Tom was also the founder and chairman of Thomas D. Wood and Company, one of South Florida’s largest, independently-owned commercial lenders. He was a past member of the Mortgage Bankers Association and a former director of the Income Property Committee. He was formerly an Advisory Board member of NationsBank, director of Barnett Bank of South Florida, president of the Orange Bowl Committee, and co-chairman of the Breeder’s Cup Committee. Tom was a former special attorney general for the state of Florida. He was also president of the Young Lawyers section of the Florida Bar and active in the Florida Bar Association. His real talent and passion, however, was mentoring young people. He was a long-time coach of championship Khoury League baseball teams. He also coached the South Miami Blue Devils football team. Four of his former players were drafted and played in the NFL. Tom was an active member of the First United Methodist Church of Coral Gables. He was the Chairman of the Pastor Parish Relations Committee and his first love was teaching a high school Sunday School class entitled “Christian Street Sense”, which he taught for 40 years. Tom loved the North Carolina mountains. He and his wife Virginia honeymooned there and they later built a home in 1965 in the community of Sapphire Valley. He loved to spend time with his family there in the summers and was also active in the Cashiers Baptist Church. He was a remarkable husband, father, Grandfather, and Great Grandfather. Teaching his children not by lecture, but by example. His strong sense of Christian faith, dedication to helping others, and humble respect he showed all he met made him loved by anyone who came to know him. Tom never met a stranger. One of the recent highlights of his life was being able to celebrate his 90th birthday with his family, known as the “Woodpile”. Tom is survived by his wife Virginia, his children Steven Hayes Wood (Mary), Thomas DeLancey Wood Jr (Kim), Deborah Wood Porcher (Charles); eleven grandchildren Megan, Taylor, Grant, Austin Wood, Ashlee Freeman (Reid), Courtney, Tom III, Carly Wood, Weldon, Stuart, Claire Porcher; great grandson Finn Freeman III; brother Peter Wood, sisters Letitia Howell and Georgiana Wood; brother in laws Paul and James Woolley (Pat), sister in laws Pat and Tess Wood; and many nieces and nephews whom he cared for throughout the years. He is proceeded in death by his brothers Hayes, David, and Hugh Wood (Molly). In lieu of flowers, the family requests donations made to any of the following: First United Methodist Church of Coral Gables, Wounded Warrior Project, or Big Brothers Big Sisters of Miami.

Thomas DeLancey Wood passed away peacefully at home on October 23, 2021 surrounded by his family. He lived a long and amazing life. He was a proud Miami native, born on September 26, 1931, the youngest son of Bernice Brandt Wood and Hayes Stearns... View Obituary & Service Information

The family of Thomas D Wood, Sr created this Life Tributes page to make it easy to share your memories.

Thomas DeLancey Wood passed away peacefully at home on October...