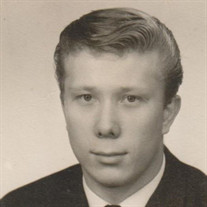 On January 26, 2021 Teuvo “Ted” Kullervo Tolvanen passed peacefully in his sleep during his usual afternoon nap in Miami, Florida. Born in the quaint town of Simpele, Finland on April 27, 1939 to mother Anna Esteri Kaartinen and father Arvi Edvard Tolvanen. He was younger brother to Aimo (wife Airi, deceased) Kaartinen, and older brother to sisters, Irma (husband Kyösti, deceased) Tolvanen Sinkkonen, Marjatta Tolvanen, Airi (husband Reino) Tolvanen Immonen, and Anja (husband Jouko, deceased) Tolvanen Korpela. Teuvo survived the hardships of childhood during and after World War II going to work in the Simpele Paper Mill at age 14. Two years later he made his way to Helsinki to find his future. He liked his bakery job as there was always something good to eat. This set him on the path to his lifelong baking career. He apprenticed in Finland, Germany, and Switzerland. He attended the famed Coba Confectionery School in Switzerland. He proudly achieved the European Master Baker designation. In his late 20’s he immigrated to the United States to follow his passion in the baking industry. He worked in a bakery in New York City that was frequented by the late Jacqueline Kennedy Onassis, while he pursued his education at Baruch College. He also attended the American Baking Institute (AIB) in Chicago on a scholarship (for industrial baking) from Sara Lee Corporation. His career in the baking industry as a food chemist led to moves all over the United States and internationally. He lived in Cincinnati, OH, Carrollton, TX, Lake Como, Italy, Toronto, ON, New Haven, CT, Helsinki, Finland, Flower Mound, TX, Pittsburgh, PA, Wellington, FL, and finally Miami, FL. His travels for work and pleasure took him all over the world, and you could say that he thrived on the constant travel. After years of working for notable companies in the baking industry such as Campbell Taggart, Frito-Lay, Galbusera of Italy, Fazer of Finland, and Weston’s of Canada, he decided to pursue his own venture by starting Ezbake Technologies, Inc. with his former wife Rita (Sparrow) Tolvanen. This venture proved successful and allowed him to retire comfortably in Florida with his current wife Eva (Dubelskaya) Tolvanen. His greatest joys were the births of his two children, Nils and Birgitta with former wife Liete Lopes, as well as the births of his four grandchildren. He was a fan of old school country music artists like Willie Nelson, Dolly Parton, and Loretta Lynn, and enjoyed passing the time listening to country music while drinking a beer and enjoying good Texas BBQ brisket. He was fluent in Finnish, Swedish, English, German, and conversational in Italian, and his communication skills helped him make friends all over the globe. He could talk to any stranger and make them feel like a friend. He also was a prolific whistler, preferring to whistle tunes of Finnish polkas. He was always up for a good laugh and never shied away from telling a dirty joke. He could be quick to temper, but just as quick to forgive. Always a generous soul, he never hesitated to help out a family member or friend in need. Most recently he was plagued with health issues that limited his travel and mobility. But he still enjoyed getting to watch his favorite football and hockey teams, as well as watching his grandchildren swim in the pool. While fully embracing American culture, he never forgot his Finnish roots and proudly maintained a dual citizenship. Taking a good Finnish sauna complete with birch branches and followed by a cold plunge in the lake always invigorated his soul. He is predeceased by his parents, brother Aimo, sister Marjatta, brother-in-law Kyösti, brother-in-law Jouko, and son Nils. Survivors include his devoted wife Eva, mother-in-law Zanna Ostaskova, daughter Birgitta Tolvanen-Annal, son-in-law David Annal, grandchildren Nicholas Annal, Ryan Annal, Kyle Annal and Sophie Annal, sisters Irma Sinkkonen, Airi (Reino) Immonen and Anja Korpela, as well as cousins and many nieces and a couple of nephews, and grandnieces and grandnephews. Visitation will be on January 30, 2021 at the VanOrsdel Funeral Home in Midtown Miami from 10AM-12PM with private services immediately following. Cremated remains will be interred near his beloved son Nils at a later date at Hilltop Memorial Park in Carrollton, Texas, followed by a celebration of life luncheon at that time.

On January 26, 2021 Teuvo &#8220;Ted&#8221; Kullervo Tolvanen passed peacefully in his sleep during his usual afternoon nap in Miami, Florida. Born in the quaint town of Simpele, Finland on April 27, 1939 to mother Anna Esteri Kaartinen and... View Obituary & Service Information

The family of TEUVO KULLERVO TOLVANEN created this Life Tributes page to make it easy to share your memories.

Send flowers to the TOLVANEN family.