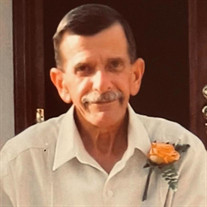 Stephen A. Moore (Steve), 71, of Miami, Florida, passed away on July 25, 2021 of late stage lung disease. He will be forever missed by family and friends. Steve was born in St. Louis, MO, on January 29, 1950 to Bernard A. Moore Sr. and Tylene (Webb) Moore. At age 17, Steve enlisted in the Army, served his country in Viet Nam, was wounded, and received the Purple Heart for his bravery; it was a defining period in his life. He met his wife, Zenaida, in Conway, AR. After they married, he and his bride briefly lived in Belize with Zenaida’s family before moving to Miami, where they made their home. They were happily married for over 40 years. In his early thirties, Steve returned to college where he earned a 4.0 during his time at Miami Dade College. His dedication and perseverance forever set an example for his daughters and the community around him regarding the importance of education. Prior to his retirement, one of Steve’s greatest joys was serving the Beth Torah Benny Rok Campus community where he was respected and loved by all. Steve was a quiet and humble man who took great pride in his family. His favorite pastimes included crossword puzzles, reading, fishing, and watching history shows with his grandsons. Steve was preceded in death by his parents and his sister, Nancy Moore. He is survived by wife Zenaida Moore, his daughters Samantha Hoare (Milton) and Amanda Duque (Richard); his grandsons Gabriel Hoare and Anthony Duque all of Miami; his brothers Bernard (Carolyn) Moore of La Salle, IL, Verne (Valerie) Moore of Frontenac, KS, and Terry (Eleanor) Moore of Ottawa, IL; along with several nieces and nephews. A memorial service will be held at the Van Orsdel Funeral Home in Midtown Miami on Friday, August 6, 2021 at 12pm noon. A reception will follow. The family suggests that in lieu of flowers, donations be made in Steve’s honor to the Miami VA Hospital. You can donate here. https://www.pay.gov/public/form/start/43270197/

Stephen A. Moore (Steve), 71, of Miami, Florida, passed away on July 25, 2021 of late stage lung disease. He will be forever missed by family and friends. Steve was born in St. Louis, MO, on January 29, 1950 to Bernard A. Moore Sr. and Tylene... View Obituary & Service Information

The family of Stephen A. Moore created this Life Tributes page to make it easy to share your memories.

Send flowers to the Moore family.