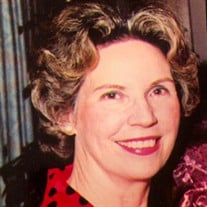 ROGERS, SHIRLEY HOUSER Passed away on July 14th. Shirley was born at Gowdy Hospital, Miami on July 30, 1928. She lived all her life in Miami and was a descendant of Miami pioneers. Shirley was the oldest of three daughters born to Roosevelt (“Roy”) Houser, a leading Miami banker, and his wife Naomi Houser, both members of pioneer Miami families. Her great grandfather, Rev. Dr. William E. Stanton was the first regular Baptist pastor in Miami. Rev. Stanton preached under a tent on the banks of the Miami River during the late 1800’s. Stanton Memorial Baptist Church (later Central Baptist Church) in downtown Miami was named for him after he helped found the church. Shirley attended The Cushman School and graduated from Miami High School before going on to Wellesley College. She graduated from Wellesley College in 1950 and married Walter S C Rogers, a young Harvard Law School graduate and later a prominent Miami attorney and banker, at Central Baptist Church on November 3rd, 1951. She was confirmed at St. Philip’s Episcopal Church on December 18, 1955 and attended St. Stephen’s Episcopal Church and taught Sunday school there. She attended St. Thomas Episcopal Church in her later years until her death. She was very active in her community serving at all levels in many organizations. In addition to serving every board position, she was President of the Junior League of Miami. She was also President of the Travelers Aid Society which was a social service agency organized to assist families in distress who were newly arrived in the community. She was an organizer of the Volunteer Service Bureau which later became part of the United Way. Shirley served on the Board of Trustees of the United Way of Dade County and was an active member for 30 years. Shirley served as a Board member of the Metropolitans, Beaux Art, the Vizcayans (serving as President) and the Vizcayan Foundation. She especially loved Vizcaya, acting as President and chair of nearly every committee. She was also very proud to have served as the Foreman (Chair) of the Dade County Grand Jury in 1972. She was a 50-year member of Chapter AK, PEO where she also served as President. She played duplicate bridge and achieved Gold Life Master status. She loved to travel with her friends and was a proud member of the “Latinas”, as her Latin travel companions called themselves. Shirley was a long-time member of The Bath Club, Riviera Country Club, Coral Gables Yacht Club, and former member of Coral Reef Yacht Club. Her beloved husband, Walter S.C. Rogers, and her two sisters, Joanne H. Robinson and Barbara H. Cross predeceased her. She is survived by her daughter Linda Rogers Buermann (Eric) and her son Craig Houser Rogers and two granddaughters, Caroline F. Buermann and Margaret A. Buermann. The family will hold a private memorial service at a later date due to the pandemic. Remembrances in Shirley’s name may be made to the Junior League of Miami Foundation, 713 Biltmore Way, Coral Gables, FL 33134 or The Vizcaya Endowment Fund, 3251 S. Miami Ave., Miami, FL 33129.

ROGERS, SHIRLEY HOUSER Passed away on July 14th. Shirley was born at Gowdy Hospital, Miami on July 30, 1928. She lived all her life in Miami and was a descendant of Miami pioneers. Shirley was the oldest of three daughters born to Roosevelt... View Obituary & Service Information

The family of Shirley H. Rogers created this Life Tributes page to make it easy to share your memories.

Passed away on July 14th. Shirley was...

Send flowers to the Rogers family.