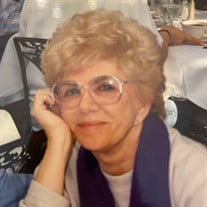 Shirley Ann Good (Steinmetz) passed away at her home on May 29, 2021, at the age of 88. Known affectionately to her family as “Mimi,” she is survived by her loving husband Bill Good of 68 years, as well as her sister-in-law Robin (who was like a sister to her) and her daughters Melanie and Sarah; her sweet brother John and his wife Valerie; her three adult children Kathy, Vickie, and Bill Jr., and their spouses, Dennis, Todd, and Michelle. She is also survived by her five adult grandchildren Katie, Jenny, William, Anna and Madelyn and their spouses Cora, Stephen, and Matthew along with her three great grandchildren Liam, Noah, and Nikolas. Preceded in her death are Shirley’s two beloved brothers Dr. Joseph Steinmetz and Dr. Edward Steinmetz. Shirley’s “friend” family was large and vibrant and included lifelong friends from their neighborhood, Pat and Walter Kunkel and close friends from Plymouth Congregational Church, Darrell and Cindy Tidwell. Shirley was born May 5, 1933, in Philadelphia. She moved with her parents, Edna and Joseph Steinmetz, and two younger brothers, Joe and Ed, to Miami when she was 6 years of age. Shirley graduated from Miami Senior High School. She married her high school sweetheart, Bill Good, on Feb 7, 1953. As a young mother, Shirley worked in the Lad and Lassie toy store on Miracle Mile and later taught preschool for many years at both Coral Gables and Plymouth Congregational Churches in Coconut Grove. Shirley and Bill attended and raised their children at Palmetto Presbyterian Church in South Miami when they were young, and later joined Plymouth Congregational Church in Coconut Grove. Shirley was dedicated to AIDS awareness and never missed the yearly AIDS Walk in the Grove. She volunteered at the Plymouth thrift store, the This ‘N That Shop, in Coconut Grove into her early 80’s. She and Bill also prepared and served meals for the homeless with the Plymouth Church Chapman Partnership for many years. Shirley loved sports, all sports, and was an enthusiastic fan of both the Miami Hurricanes and the Miami Dolphins. She also loved potato chips and all things sweet, including Dairy Queen ice cream and the little hot doughnuts at Bangkok City served up by her favorite waitress Lexie. During this last year, Shirley was cared for lovingly by her husband Bill, her daughter Vickie, and her wonderful caregiver Karleen Reid. Shirley (Mimi) was greatly loved by friends and family alike, and she will be greatly missed! Please enjoy a hot doughnut and a bowl of ice cream in honor of Shirley’s sweet life! A memorial service honoring Shirley will be held Sunday, June 6, at Plymouth Congregational Church, 3400 Devon Road, Miami, FL 33133. A reception in the garden will start at 11:15 AM followed by the memorial service at 11:45 AM. In lieu of flowers or gifts, donations can be made in Shirley’s honor to Growing Together Preschool at 3301 Boulder Court, Raleigh, NC, 27607, or to Plymouth Congregational Church Outreach Programs at www.plymouthmiami.org. Written condolences can also be made through Van Orsdel Funeral and Cremation Services website at wwwvanorsdel.com.

Shirley Ann Good (Steinmetz) passed away at her home on May 29, 2021, at the age of 88. Known affectionately to her family as &#8220;Mimi,&#8221; she is survived by her loving husband Bill Good of 68 years, as well as her sister-in-law Robin... View Obituary & Service Information

The family of SHIRLEY ANN GOOD created this Life Tributes page to make it easy to share your memories.

Shirley Ann Good (Steinmetz) passed away at her home on May 29,...

Send flowers to the GOOD family.