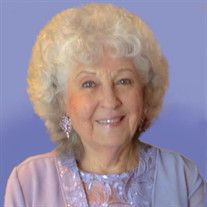 Sally JoAnn McGlaun—a great grandmother, a woman of deep faith and a lifelong Christian Scientist, a genealogist, an animal lover, a musician, and an artist—passed away on December 28, 2021, peacefully in her sleep of natural causes. Though Sally loved Miami and had lived here since she was 14 years of age, she came from a long line of Texans and was proud of her heritage. She was born in San Angelo on April 12th, 1933 to Charles Edmond McGlaun and Mary Molete Williams. Sally was a strong and independent woman who survived two husbands: Oliver Kedric Fink Jr., with whom she had two children; and Joseph Weinman, to whom she was married until his passing in 1989. She was admired by all who knew her for her sharp mind, fierce determination, boundless energy, strength of character, and generous spirit. By her family, she will be remembered most for her unconditional love, expressed in countless acts of thoughtfulness, and for the kindness she showed the many pets and stray animals that she cared for. She was a beloved mother, a humanitarian, and a chronicler of life. From early childhood, Sally played the piano and painted in oils. She also had a keen business mind. For twenty years, she owned and operated a print shop with her second husband Joe. Whatever the project, she worked as hard as did her pioneer fore-bearers in Texas. Studious and devoutly religious, she spent decades researching the Bible and compiled her research in more than a dozen neatly organized binders. As devoted to her family as she was to her religion, she spent years meticulously documenting both sides of her children’s lineage, which she also archived in dozens of binders. Sally could have been a historian, or a librarian, or a teacher, so deft was her curious mind. Indeed, to her family it seemed she could accomplish anything that she set her mind to. She is survived by her two children, Susan Molete Fink and Charles Kedric Fink; by her four grandchildren, Ashley Franco, Charles Kedric Fink Jr., Michael Fink, and Kyle Fink; and by her seven great-grandchildren, Aphrael Waltrip, Erin Waltrip, Joshua Franco, Kaia Fink, Chloe Fink, Karl Fink, and Oliver Kedric Fink III. Sally would have said that life is forever. To Sally we say this, that we will miss you forever, more than we can ever express. Funeral Services will take place on Saturday, January 8th, 2022 from 11:00am-1:00 pm at: Van Orsdel Funeral Home 4600 S.W. 8th Street Coral Gables, FL 33134 305-446-4412

Sally JoAnn McGlaun&#8212;a great grandmother, a woman of deep faith and a lifelong Christian Scientist, a genealogist, an animal lover, a musician, and an artist&#8212;passed away on December 28, 2021, peacefully in her sleep of natural causes. Though... View Obituary & Service Information

The family of SALLY JoANN McGLAUN created this Life Tributes page to make it easy to share your memories.

Send flowers to the McGLAUN family.