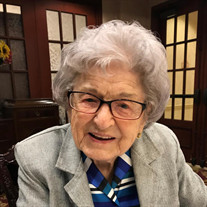 Rose O. Phelan (Matthewman) 102 Years of Age – One of a Kind 8/19/1918 – 12/8/2020 Rose O. Phelan, formerly known as Rose F. Matthewman, passed away in her sleep in Miami, Florida on December 8, 2020 at the age of 102. She was truly one of a kind. Rose was a devout Catholic and she truly loved St. Brendan’s Catholic Church in the Westchester area of Miami. Rose was born on August 19, 1918 in Douglas, Massachusetts as Rosalie Ofcarcik. Her father, Paul Ofcarcik and her mother, Susana Smolen, were both born in Austria (Czechoslovakia) and they settled in Douglas, MA after emigrating to the United States. As a student at age 17, Rose began working at the Hayward Woolen Company in East Douglas, MA, as a secretary. She completed high school and on August 17, 1940, at the age of 21, she married James Byron Matthewman at St. Denis Catholic Church in East Douglas, MA. That marriage produced 4 children, Susan Matthewman (Melus-Concha), James Matthewman, Robert Matthewman, & William Matthewman. Rose’s daughter Susan and son Robert sadly pre-deceased Rose, which caused her great pain and sadness. Her surviving sons, James and William, are both former Miami police officers. James is now retired and William, who became a lawyer, is now an active Judge in Federal Court in the Southern District of Florida. While serving in the United States Navy during WWII, Rose’s husband, James, received training for a time in Miami Beach, Florida. When James returned from the war, he told Rose that they were never again going through another Massachusetts winter, and they promptly moved to Miami, Florida in 1946. In Miami, James began an oil delivery business, and he and Rose built a home in Miami near S.W. 87th Avenue and 32nd Street, which at that time was on the edge of the Everglades. Sadly, on August 9, 1958, at the young age of 43, James was found dead in his oil truck as a result of a tragic workplace accident. As a result of her husband’s tragic and sudden death, Rose, who had been a homemaker, became a single mother of 4 young children. She lived across the street from St. Brendan’s Catholic Church in the Westchester section of Miami, and the priests, staff and parishioners of St. Brendan’s were very good to Rose and her children. Rose was a long-time parishioner of St. Brendan’s and always had a deep love for St. Brendan’s and its members. In order to support her 4 young children as a single Mom, Rose began working as a secretary at West Miami Jr. High School in Miami, Florida. While working there as a secretary, and raising her children, Rose obtained her Bachelor of Arts degree (Cum Laude) from the University of Miami on 8/29/1964 after attending college on nights and weekends. Rose then became an English teacher at West Miami Jr. High School. Rose eventually obtained her Masters degree in Education as she continued her teaching career. On August 31, 1962, Rose married her second husband, James H. Phelan, a wonderful man who was both a good husband and step-father. James sadly passed away from heart disease in 1982, leaving Rose a widow for a second time. Rose eventually retired from the Miami Dade Public School system. While in retirement, Rose moved to Colorado Springs, Colorado to live near her daughter, Susan, and the two lived as neighbors for several years. The plan back then was that Susan, who was the spitting image of Rose, would care for Rose as she aged. Unfortunately, Susan became ill and it was Rose who ended up caring for Susan until Susan sadly passed away in Colorado Springs in 2006. After Susan’s passing, Rose returned to South Florida. Until she was 101, Rose lived at the Palace Independent Living in Kendall where she had her own apartment in the Independent Living residences. She loved the Palace and its staff and residents, and they loved her. Rose moved to The Palace Assisted Living Memory Care residence in Homestead in early 2020 as she approached 102 years of age and dementia got the better of her mind. Some would say that Rose had a difficult life, losing two husbands and two children, and being widowed while a homemaker with 4 young children. But Rose was always hard-working, loving and caring, and she never complained or said a bad word about anyone. She had a very strong Catholic faith and she is now with our Lord. As she said when she turned 100: “At my age every day is a gift. I’m content and ready to meet the Lord when the Lord is ready for me”. Rose is survived by her son James Matthewman, of Miami, wife Marlene, and children (Rose’s grand-children) Barbara Ann, James, Jr., and Shawn; son Judge William Matthewman, of Palm Beach County, wife Diane, and children (Rose’s grand-children) Kelly, Scott, David, and Mark; Susan’s children (Rose’s grand-children) Kristen, and John. Rose is also survived by numerous great grand-children. Rose was loved by all. She will be sorely missed, never to be replaced. Funeral services are private due to the COVID-19 pandemic.

The family of ROSE O PHELAN created this Life Tributes page to make it easy to share your memories.

Send flowers to the PHELAN family.