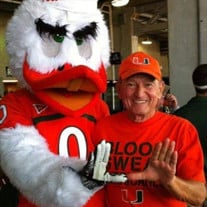 Robert “Bob” Charles Mugar,82, passed away quietly at home on Friday, November 19, 2021. Born in Worcester, MA, in 1950 he moved to the Miami area. Bob attended Ponce Jr High while residing in South Miami where he met his wife Norma Jean. At 14, due to family commitments, Bob paused his education but returned at age 70 to proudly receive his GED without a single refresher course. Bob worked for and became the co-owner/operator of Western Trail Auto “Miami’s Most Complete Automotive Center” for 30 years. After selling the company, he continued as a consultant to the auto industry and retired as a purchasing agent for Bennett Auto Supply. Bob was also dedicated to the community and served as president of the Kiwanis “K-Land” Center for youth athletics. He also served on the board of the “Miami Touchdown Club” and was a founding member of University of Miami’s “Athletic Federation.” Bob was also an accomplished athlete himself, who made the 1968 Olympic Team as a alternate Jai-Alai team member after injuring his arm in the finals. During retirement, he was an Assistant Superintendent of exhibits at the Dade County Youth Fair and a devoted volunteer for Emerson Elementary. Bob was a passionate Hurricane fan, who loved traveling the world and always saw his wine glass half-full, not empty. Bob was preceded in death in 2007 by his beloved wife of almost 51 years, Norma Jean Ogden Mugar. Also by his mother, Stella Whitney Mugar; his father, Archie Mugar; his brother, Gerald S. Mugar and his sister, Elaine M. Mugar Higley. He is survived by his son, Richard G. Mugar (Nancy) of Winter Park, FL, daughter, Dawn R. Mugar of Miami, FL; beloved nephew, who was like a son, Charles “Chip” James (Rene) of Mooresville, NC; his sister, Jean F. Mugar White of Shrewsbury, MA. Bob is also survived by friends that were family to him; Lila Rivas, Michelle Durkee, Steve Cunio and bonus grandsons Devin and Trevor Cunio as well as the former “grand-students” of Emerson Elementary; “grand fur babies”, Gigi and The Cats along with countless loving friends. The family would like to thank the physicians and staff of Baptist Hospital, Catholic Hospice and all his compassionate caregivers. In lieu of flowers, please donate to the University of Miami Athletic Department. Visitation will take place on Friday November 26, from 10:00 AM to 2:00 PM, Celebration of Life Service at 2:00 PM at Van Orsdel Funeral Home, 11220 N Kendall Dr. followed by interment at Woodlawn South. Adherence to COVID protocol is requested.

Robert &#8220;Bob&#8221; Charles Mugar,82, passed away quietly at home on Friday, November 19, 2021. Born in Worcester, MA, in 1950 he moved to the Miami area. Bob attended Ponce Jr High while residing in South Miami where he met his wife... View Obituary & Service Information

The family of Robert Charles Mugar created this Life Tributes page to make it easy to share your memories.

Robert “Bob” Charles Mugar,82, passed away quietly at home on...

Send flowers to the Mugar family.