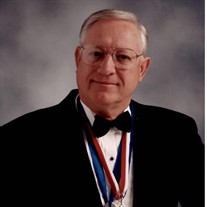 ROBERT JEROME FILER, FAIA 11/5/32 to 11/18/2021 Experience: Jerome Filer started the firm in 1962, as the President and sole proprietor. The firm has undergone several name changes over the years and ended up as Filer and Hammond... View Obituary & Service Information

The family of Robert Jerome Filer created this Life Tributes page to make it easy to share your memories.

Send flowers to the Filer family.