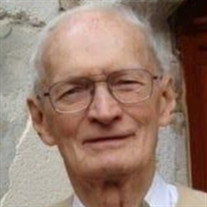 Robert “Bob” W. Berg, 91 years old, passed away on January 26, 2022 at his home in Miami, Florida. Bob was born in San Antonio, Texas, on May 24, 1930, the son of James Adolf and Winnie Smith Berg, and brother of Eldon and Madeline. He lived in San Antonio until he was 18, when he enlisted in the Air Force and was sent to Panama to serve during the Korean War. Fascinated by the adventure of living abroad, upon discharge from the service, Bob enrolled in the School of Foreign Service at Georgetown University and graduated in 1956. He began working for the US government prior to graduation and continued do so for his entire career. His first post abroad was at the US embassy in Managua, Nicaragua. There he met his wife, Myrna Esperanza Ocón Espinosa, to whom he was married for nearly 60 years. An avid traveller, and skilled in foreign languages, he appreciated the opportunity to serve his country while living in Dominican Republic, Bolivia, France, Taiwan, and Mexico, as well as Dallas, Texas and Potomac, Maryland. Upon retirement, he worked as a consultant for the government, travelling regularly across four continents. A devoted husband and father, Bob also had a profound love of animals, especially cats. He imparted on his children the value of hard work, a love for history, art and culture and the importance of faith. A devout Catholic, he was involved in his parish in Rockville, Maryland, where he sang in the choir, as well as in St. Mary’s Cathedral and St. Martha’s Parish of Miami where he served as a lector for many years. Bob is survived by his wife, Myrna Berg, his children, Robert James, Carolyn and Janine, and six grandchildren: Carisma, Morris, Wendell, Mason, Max and Maximilian. Viewing will be on Monday, January 31st from 11:00-12:30 at the Van Orsdel Funeral Home, 4600 SW 8th Street in Coral Gables, followed by a mass at 1:30 p.m. at St. Martha’s Catholic Church in Miami Shores, and burial at 3:30 p.m. at Our Lady of Mercy Cemetery in Doral. In lieu of flowers, contributions can be made in Bob’s name to St. Joseph’s Indian School in Chamberlain, SD or to Sobe Cats in Miami Beach, FL.

The family of ROBERT WENDELL BERG created this Life Tributes page to make it easy to share your memories.

Send flowers to the BERG family.