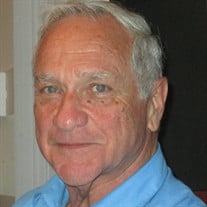 Richard de Aguero (November 13, 1943 – December 1, 2020) de Aguero, Richard ("Mr. D"), 77, passed away peacefully after a brief battle with pancreatic cancer. He is survived by his daughter, Sarah (Frank), his grandsons, Vincent and Justin, and his brother, Dan. He was predeceased by his beloved wife, Jane, his siblings, Louis and Anita, and his parents, Louis and Georgina. Richard attended Miami Senior High, the University of South Florida, and Barry University, where he earned a master's degree in Mathematics Education. He devoted his life to teaching and found pure joy in his work. He smiled at the mere mention of "mathematics" even in his last days. He was a devout Catholic and a dedicated member of Saints Peter and Paul Catholic Church, where he served in many roles including Lector, Eucharistic Minister, and Festival Treasurer. He cultivated a deep devotion to the Rosary and offered prayers for the infirmed. Richard taught at Ada Merritt Junior High, Miami Senior High School, and Miami-Dade College. Even in retirement, he was known as Mr. Miami High, supporting the school at community events and through the Alumni Association. In his most important role, Richard became a father figure to many at school and church and served as a positive role model for generations. Richard was proud to be a native Miamian and the great-great grandson of the original owner of the Audubon (Geiger) House in Key West. He loved sharing his genealogical research and family lore with his grandsons. He loved giving tours of Miami High and Vizcaya and exploring every nook and cranny of his hometown. Richard lived life to its fullest. Yet he still had plans to travel to Greece and Turkey and participate in more family research projects. Instead, God called Richard home. Now we all should share our talents, faith, and friendship with others to keep Mr. D's memory alive. Visitation will be held Wednesday, December 9 from 10-11:30 am at Van Orsdel Coral Gables. In lieu of flowers, please donate to your favorite charity in Richard’s name. The funeral Mass will be private, by RSVP only, due to COVID restrictions. To view a livestream of the Mass, go to the Saints Peter and Paul website on December 9 at Noon: stspeter-paul.weebly.com

The family of RICHARD A DE AGUERO created this Life Tributes page to make it easy to share your memories.