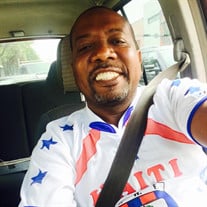 Renald Paul is the son of Christophe Paul and Elimene Felisca he passed away June 6, 2021, at the age of 55. A son of Haiti born February 17, 1966; but a resident of Miami Florida. He was a learner who valued education, an inventor who created... View Obituary & Service Information

The family of Renald Paul created this Life Tributes page to make it easy to share your memories.

Renald Paul is the son of Christophe Paul and Elimene Felisca...

Send flowers to the Paul family.