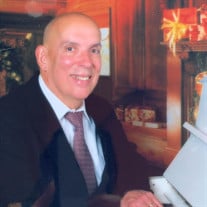 Raul Florencio Hernandez, 83, of Miami, Florida (via Havana, Cuba) has passed on from his earthly existence on October 27, 2020, succumbing to complications from the COVID-19 virus that has caused so much pain throughout the world, and leaving a large family that still longed for his presence in their lives. He was born in Havana, Cuba on January 3, 1937 where he attended school, grew up, and met his future lovely wife, Lydia. They married in November 1960 and would soon have two children, Alba and Ricky. He would have hoped to study and raise that family in his beloved homeland, but the tyranny that would envelop that land would eventually lead him to bravely take that family to a new place, the United States of America. There they could have the freedom and opportunity that was no longer possible in the tropical paradise of his birth. He was warmly welcomed in this new land by brothers and sisters, first settling in New Jersey, where a new daughter, Doris, would enter the family, and later in South Florida. Wherever he was, Raul worked hard to provide for his family, sometimes working two jobs if necessary and making sure they had everything they needed. And he made sure that the Abuelas, Fefa and Soledad, were also taken care of. But he still found time for memorable family vacations, and to enjoy the good fiesta where he and Lydia could show off their championship dancing skills. Along the way, the family would grow to include grandchildren Ivette, Kristie, Anthony, Nicholas & Audrey, and then great-grandkids, Anaya, Aiden, Gavin, & Lyanna. Nothing made him happier than to see the entire family together, happy, and secure, for it was in a loving family that he could see that his life’s purpose and legacy had been fulfilled. When he retired from his long-time Pharmacy position at the Veteran’s hospital, he had more time to devote to his church, St. Timothy, and the ministries which he was so very proud to be a member. From a participant in the retreats of Cursillos and Emmaus, he came to be an enthusiastic assistor in these movements. Becoming a 4th degree Knight of Columbus allowed him to further use his faith to be of service to those in need. Rescate and Kairos provided him the opportunity to do God’s work in visiting prisons and spreading the Lord’s word to those who may have lost hope. Most recently, he was particularly inspired by the charitable work he did with the Caballeros Catolicos, attending weekly meetings right up until the spring of this year. In all these endeavors, he made so many friends, who are now added to the list of those who will sorely miss him. Raul is survived by his loving wife, Lydia, of nearly 60 years, the kids and grandkids and their spouses, and his brothers and sisters, Roberto, Rodolfo, Laura, Yolanda and their families. It is their hope that in the next world, God’s Love will heal him of the physical afflictions which he dealt with in the last few years, and that the entire family may be reunited in that love one day. Due to the COVID situation, It is unfortunate that funeral services can only be open to immediate family members, as it is a regret that these times will not allow all his family and friends the chance to fully show how much he was loved and will be missed.

Raul Florencio Hernandez, 83, of Miami, Florida (via Havana, Cuba) has passed on from his earthly existence on October 27, 2020, succumbing to complications from the COVID-19 virus that has caused so much pain throughout the world, and leaving... View Obituary & Service Information

The family of Raul Hernandez created this Life Tributes page to make it easy to share your memories.

Send flowers to the Hernandez family.