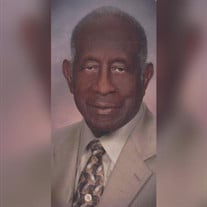 Percy Oliver was the fifth child born to the late Percy and Florence Oliver in Miami, Florida on March 26, 1931. He was preceded in death by four sisters, Inez Bullock, Doris High, Agnes Oliver and Mary O. Johnson; and two brothers, Prince Oliver and Cyril Oliver. Florence reared nine children and three grandchildren, Patricia Ferguson, Dorothy Pugh and Douglas Mitchell. Percy’s surviving siblings are Ruth Oliver and William Oliver. Percy received his early education in Dade County Public Schools. He attended Douglas Primary, Phyllis Wheatley Elementary, and graduated from Booker T. Washington Junior/Senior High School, Class of 1949. While in ninth grade at Booker T. Washington, Percy became interested in organized football and as a tenth grader he became a member of the varsity football team at Booker T. Washington. At that time, he earned a starting position on the line as a guard and a tackle, playing both offense and defense. While playing football, he was voted to the All‐State and All‐City Teams. During his senior year, Percy was offered scholarships at Michigan University, Purdue University, Notre Dame, and the University of Illinois. After graduating from high school in 1949, Percy enlisted in the U.S. Air Force and served in Korea during the Korean conflict. He served three years and six months and received an honorable discharge in 1952. In 1953, he enrolled and played football at the University of Illinois, and graduated in 1957 with a Bachelors of Science degree in Education. After teaching for two and a half years at Attucks High School in Carbondale, IL, he returned to Miami and taught at North Dade Junior/Senior High School. In 1965, he was transferred to Miami Jackson Senior High School where he taught school and coached football. While working at Jackson, he began working on his post‐graduate studies receiving a Masters of Education in Curriculum and Instruction, with emphasis on Administration. In 1971, Percy was promoted to Assistant Principal and assigned to Norland Senior High School. In 1974, he was promoted to Principal and assigned to Miami Jackson Senior High School. In 1984, he was transferred to Homestead Senior High School where he served for 9 years before retiring in 1993. After retiring, Percy worked part‐time in MDCPS Athletics and School Accreditation for 13 years, fully retiring in 2006. Percy met and married Portia Liggett Forbes, who was a help mate and the love of his life. He credits her with bringing order and stability to a highly unorganized life. They were married for 40 years. Percy has four children; daughters Cynthia Jones, Gerardette Oliver; step-daughter, Jolanda (Andre) Sheppard, and one step-son, Rodney Forbes. At an early age, Percy attended St. Francis Xavier Catholic Church and Trinity Wesleyan Methodist Church. In the early part of 1949, Percy became disenchanted with religion and stopped attending church services. As an adult, Percy met Father Lenin, Priest at Holy Redeemer Catholic Church, and they became close friends. After many visits and conversations, Percy agreed to have Father Lenin baptize him again, since he had been inactive in the church for such a long period of time. After Father Lenin died, Percy transferred his membership to Christ the King Catholic Church under the leadership of Father Seamus O’Shaunessy. That was probably the greatest religious experience of his life. Later, Father Seamus was transferred and Percy changed his membership to St. John Neumann Catholic Church where he remained ever after. Percy received the following honors: Most Valuable Player in Football at Booker T. Washington, Amateur Athlete of the Year (awarded by Downtown Quarterback Club), Selected to be on the All Big Ten Squad, First Black Football Player in the North‐South Shrine Game, First Black Principal to become President of the Greater‐Miami Athletic Conference (GMAC), First Black Coach in an integrated school, and Drafted by the Green Bay Packers Professional Football Team. Organizations that Percy belonged to include: Lifetime member of the University of Illinois Alumni Association, Lifetime member of the Lettermans Club (Tribe Illini), Lifetime member of the Veterans of Foreign Wars, Phi Delta Kappa International, Booker T. Washington Class of 1949 (The Greatest Class Ever). Percy is survived by his wife, Portia Liggett Oliver; two daughters, Cynthia A. Jones and Gerardette Oliver; step-daughter, Jolanda (Andre) Sheppard; step-son, Rodney Forbes; sister, Ruth Oliver; brother, William Oliver; grandchildren, Erica Brooks, Oliver Aaron Jones, Matthew K. Gay, Amanda (Jon) Forbes-Palmer, Bria A. Forbes, Aubrey E. Sheppard and a host of nieces, nephews, cousins, and other family members and friends. A visitation will take place on Wednesday, April 28, 2021 from 12:30-6PM at Van Orsdel Kendall Chapel. A Funeral Mass will be held at St. John Neumann Catholic Church on Thursday April 29, 2021 at 10AM, followed by a burial at South Florida National Cemetery. In lieu of flowers, the family requests that you consider making a donation to the Parkinson's Foundation in Percy's name.

The family of Percy L. Oliver created this Life Tributes page to make it easy to share your memories.

Percy Oliver was the fifth child born to the late Percy and Florence...

Send flowers to the Oliver family.