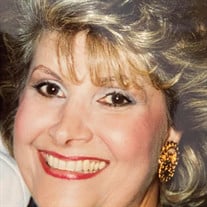 On March 28, 2021, Penelope Angleton Behrend, beloved wife, mother, “Honey” and sister passed away. Born in Miami, Penny was the daughter of Angelo and Mary Kays. From an early age, music would play a significant role in her life. An opera singer, Penny studied music at the University of Miami and sang in several operas in South Florida. Penny was preparing to make her operatic debut at Milan’s Teatro alla Scala, one of the world’s most famous opera houses when she met James Angleton Sr. and they married. Their two children, James Angleton Jr., and Marina became Jim and Penny’s focus, yet music continued to play a role in their lives. Together, they oversaw the restoration of the Miami Opera Guild building. Penny was also a founder and president of Young Patronesses of the Opera and sang in the Saint Sophia Greek Orthodox Cathedral choir. After Jim’s passing, she met Richard Behrend of Ohio. The two fell in love and married. Devoted to one another, they spent 12 years traveling between their homes in Miami, Port Charlotte, and Canada and visiting Dick’s family in Ohio. Penny never met a person, sang a song, or attended a gathering she didn’t love. Her lighthearted spirit and smile could light up a room. Our beloved Penny will forever be in our hearts. Her husband Richard, son Jim Jr. and his wife Connie, daughter Marina and husband Jim, beloved brother and sister-in-law Ted and Mary Alice Kays, grandson Theodore James, and granddaughters Amelia Mary and Kathryn Penelope survive her. Private services will be held for immediate family members only. In lieu of flowers, please send donations to St. Sophia Greek Orthodox Cathedral at 244 SW 24 Rd, Miami, FL 33129.

On March 28, 2021, Penelope Angleton Behrend, beloved wife, mother, &#8220;Honey&#8221; and sister passed away. Born in Miami, Penny was the daughter of Angelo and Mary Kays. From an early age, music would play a significant role in her life.... View Obituary & Service Information

The family of PENELOPE ANGLETON BEHREND created this Life Tributes page to make it easy to share your memories.