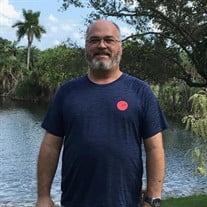 Paul E. Martin, 57, of Coral Gables Florida, passed away unexpectedly on September 17, 2021. Paul was born in Coral Gables at Doctor’s Hospital on January 21, 1964. He graduated from South Miami Senior High School in 1982 and began working at Simmonds Precision, which eventually became L-3 Communications. Over the span of 28 years, he worked his way up at L-3 from avionics technician to operations supervisor. He then began working at Kendall Presbyterian Church as operations manager from January 2011, until his passing. Paul and his wife joined Kendall Presbyterian Church in March 1998, where he became a deacon in April 2001. He always had a special place in his heart for Kendall Christian School staff, teachers, parents, and students. Paul is survived by his wife Margot, their son Matthew, his brothers and sisters, Kathy, Jim, Tim, Carol Jean, Peter and Dan, and many nieces and nephews. He is predeceased by his parents Clair and June. A memorial service will be held on Saturday, October 23rd, at 10 AM at Kendall Presbyterian Church (8485 SW 112 Street), and will also be live-streamed on the church’s Facebook page and YouTube channel for those who cannot attend. The family suggests that in lieu of flowers, donations be made to Fairchild Tropical Botanic Garden, or the charity of one’s choice.

The family suggests that in lieu of flowers, donations be made to Fairchild Tropical Botanic Garden, or the charity of one’s choice.