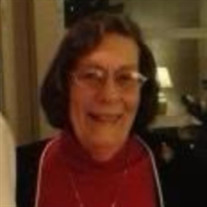 On Wednesday, March 17, 2021, Nannette Gibbons Chumbley, loving mother of two sons and grandmother to four, passed away at the advanced age of ninety-four. Nannette was born in Jacksonville, Florida on November 14, 1926. She was raised in Cocoa, Florida until attending Brenau in Gainesville, Georgia and then the Peabody Institute of Music in Baltimore. While in school at Peabody, she met her future husband R.E.L. Chumbley (Ed). They were married in 1952 and raised sons Robert and Douglas in Coral Gables, Florida. Nannette and Ed Chumbley became two of the most sought after piano teachers in Miami for over fifty years. Beloved by students, parents and dedicated to their faith through St. Philip's Episcopal Church, they were pillars of the parish and music communities. In her private time, Nan loved to read, play bridge and watch vintage movies as well as sing in the St. Philip's Church choir. She cherished her friends and fellow St. Philip’s parishioners who made her life after the passing of her husband so beautiful and fulfilling. Nannette was preceded in death by her beloved husband, Ed, in 2006, and by her granddaughter, Kate , in 1995. She is survived by sons Robert, Douglas and his wife Lois, grandchildren Vanessa, Alexander, Laura, Daniel and sister Patricia as well as Patricia's two daughters Susan and Nannette. Nannette’s family would like to thank everyone at Three Palms at East Ridge for the outstanding care and affection they gave Nannette. Due to COVID, there will be a small graveside service on March 27, 2021 at 1:00 pm at Miami Memorial Park, 6200 S.W. 77th Avenue. When we are able to gather safely, there will be a memorial service and celebration of her life.

On Wednesday, March 17, 2021, Nannette Gibbons Chumbley, loving mother of two sons and grandmother to four, passed away at the advanced age of ninety-four. Nannette was born in Jacksonville, Florida on November 14, 1926. She was raised in Cocoa,... View Obituary & Service Information

The family of NANNETTE G CHUMBLEY created this Life Tributes page to make it easy to share your memories.

Send flowers to the CHUMBLEY family.