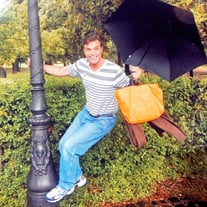 On Thursday November 5th our Michael (Miguel Angel) went out for his ritualistic evening run. That night his best run-time was surpassed when the angels flew down from heaven above and carried him swiftly away. God creates us all as individual unique beings, and he must have been in a pretty good and humorous mood when he created Michael. He was bestowed with the loudest laugh that filled not only the space he was in, but the hearts of all those within ear shot to hear it. He was real and genuine in a world were that is so rare today. He was selfless, (except with his hoodies and fanny packs). He was giving to everyone he met, who was in need of his abilities, which were vast and deep. He was a brilliant Attorney, CPA and unrelenting business man, and somehow through all those dealings and negotiations, a friend. He was always up to date on everything; history politics stocks a never-ending list. He had to know it all and then proceed to tell you that you were wrong and just did not understand. Lord he was silly, goofy, playful, adored children, loved always without restraint. He was hard-headed, he loved to travel, take hikes, explore, take naps at inopportune times, kick butt in Tae-Kwon-Doe, and above all help others. The epitome of the American dream, a Cuban immigrant Michael reached for the moon and landed amongst the stars. Although humble, Michael embodied a spirit of love, dedication, passion, hope and resilience and never gave up his enduring spirit no matter what. Beyond his numerous qualities, Michael’s greatest pride was and is his family: his wife of 36 years Jeannette and his beloved daughter Bryanna; He wished to have had the time to guide his daughter and son to be Tanner on their future life together. Immediate family was never a limitation to Michael. As he leaves a hole in the hearts of many, including his nieces, nephews, his Indian son, Heidi, Jaimie, Hunter, Kaelah, Crystalyn, Ashleyn, Kaitlyn, Devon, Connor, Scott, and Melanie. As well as Nick, Alex, Carina, Fernie, Katarina, Lu, and JC. His love was not limited by blood, and he loved his daughters’ friends like his own, having 2 daughters in Andrea and Katarina, and family through Richie and Jonathan. Finally he leaves behind his brother Raul, and other brothers through love, David, Harry, and Jack. His storage family, the cat herder, and the rest of the sly cats were his people and his family. He will continue to guide, frustrate, and be there in every zoom and meeting they have. We ask that you laugh loudly, smile whenever possible, forgive each other, and love with an immensity that will move our world. Finally, my spinning top as I called him, is resting until he will begin to spin again with the task that god may set before him. Love Jeannette

On Thursday November 5th our Michael (Miguel Angel) went out for his ritualistic evening run. That night his best run-time was surpassed when the angels flew down from heaven above and carried him swiftly away. God creates us all as individual... View Obituary & Service Information

The family of Miguel Angel Nunez created this Life Tributes page to make it easy to share your memories.

On Thursday November 5th our Michael (Miguel Angel) went out...

Send flowers to the Nunez family.