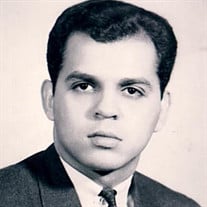 Melvin Martinez, 83 of Pembroke Pines, Florida, passed away on May 14, 2021 He was born in Yauco, Puerto Rico on March 2, 1938 to Manuel and Carmen Martinez. He had four siblings, brothers Joselyn, Irving, Manuel and sister Madeline. His family moved to New York when he was a young boy where he attended high school and college. He was married to Elva Martinez. He began his career working for Pepsi Cola where he worked his way up to eventually become President of the Pepsi Cola concentrate division in Cidra, Puerto Rico, which supplied soft-drink concentrate for Pepsi Cola internationally. He was active during his career in the Junior Chamber of Commerce, Little League, Cub Scouts and Webelos. He is survived by his loving and adoring family, wife Elva Martinez, son Mel Martinez, Jr., daughter Lynda Martinez, step sons and daughters, Franklin and Galudh Rojas, Fernando and Ruby Rojas and Hypatia and Dale McMichael. Grandchildren, Danielle and Kellen Key, Savannah Martinez (fiancé Kyle Peterman), grandson Alex Martinez and great granddaughter Evangeline Grace Key. Step-grandchildren Mauricio Rojas, Allison Rojas, Ariana Rojas, Daniel and James McMichael. As well as by his many other family and friends who loved and adored him including former wife and friend, Priscilla Martinez. He was known for his infectious smile and sense of humor. He loved music, dancing, sports and cooking. More important was his generous, selfless and unwavering love and support for his family. He was never critical or judgmental, he always respected and supported you and your life choices. He loved parties and was often the center of attraction. If you knew him or simply just met him, you could not help but be drawn by his warmth and sincerity. He was a beautiful man and soul. He is so missed!

Melvin Martinez, 83 of Pembroke Pines, Florida, passed away on May 14, 2021 He was born in Yauco, Puerto Rico on March 2, 1938 to Manuel and Carmen Martinez. He had four siblings, brothers Joselyn, Irving, Manuel and sister Madeline. His... View Obituary & Service Information

The family of Melvin Martinez created this Life Tributes page to make it easy to share your memories.

Melvin Martinez, 83 of Pembroke Pines, Florida, passed away on...

Send flowers to the Martinez family.