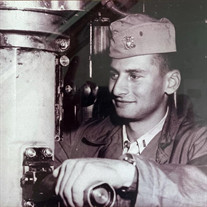 Marvin L. Schenker, a New York native, was born April 26, 1928 to Jewish immigrant parents. Appointed to the U S Naval Academy from New York, he became an intercollegiate gymnastic champion for the Navy. Upon graduation in 1950, he served in USS Helena (CA75) in the Korean conflict. After submarine school graduation, in 1952, he operated in Atlantic, Mediterranean and Caribbean waters in various diesel submarines. Qualifications achieved included submariner, Navy diver, technical air observer, and submarine commander. Following a tour as Navigator in 1962 in USS George Washington, the world’s first nuclear powered ballistic missile firing submarine, he commanded USS Quillback 1962-1964. Subsequently, after nuclear power training, he commanded Polaris and Poseidon missile submarines USS Lafayette and Nathanael Greene in succession 1966-69. His efforts in command of the Submarine Training Center, Charleston, S.C., 1969-72 were distinguished by award of the first Navy Meritorious Unit Citation to a training facility. Next followed a tour as Ass’t Chief of Staff to Commander of Pacific Submarine Forces at Pearl Harbor, with responsibilities including coordinating all missile submarine operations in the Pacific. He commanded Naval Station, Mare Island, CA prior to retirement in 1977. Since retirement, Capt. Schenker has resided in South Florida with his wife, Helene. Involving himself in marine related pursuits, he operated a small fleet of freighters from Miami, served as an assistant to the Director of the Port of Miami, and ran the service function of a large marine electronics firm. Heavily involved in sailboat racing, he collected silver both as skipper of small yachts and navigator of larger vessels. Also occupying time and energy was his more recent landlubber hobby of growing rare tropical fruits (in a salt air locale). Since 1989, he has considered himself semi-retired while actively engaged in adjusting compasses on ships and yachts worldwide. He is survived by the former Helene Garth who has been his spouse since May 1954, and their two sons, Harold G. Schenker and Allan L. Schenker.

Marvin L. Schenker, a New York native, was born April 26, 1928 to Jewish immigrant parents. Appointed to the U S Naval Academy from New York, he became an intercollegiate gymnastic champion for the Navy. Upon graduation in 1950, he served in... View Obituary & Service Information

The family of MARVIN L SCHENKER created this Life Tributes page to make it easy to share your memories.

Send flowers to the SCHENKER family.