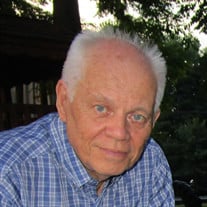 Marvin Victor Mielke, Ph.D. of Coral Gables, FL died on Tuesday, February 23, 2021 at Vitas Hospice Care at the University of Miami Hospital in Miami, FL. Death was due to an aggressive cancer. Marvin was born May 2, 1939, the only child of Milton and Alice (Gergs) Mielke, in the rural area of Marshfield, WI. He attended several primary schools in the area and graduated from Marshfield Senior High School in 1957. He received his bachelor and master’s degrees from the University of Wisconsin (Madison), his Ph.D. in Mathematics from Indiana University (Bloomington), and did postgraduate work at the Institute for Advanced Study in Princeton, NJ. He began his career as a mathematics teacher at the University of Miami in 1966, where he remained as a Professor of mathematics until his death. On Sept. 6, 1969 Marvin and Beverly Jean Sommer were married in Beloit, WI. After their marriage they made their home in Coral Gables, FL. Marvin enjoyed a wide variety of interests including fruit cultivation, genealogy, reading, in addition to thinking and writing about mathematics. As a couple they did extensive traveling to many parts of the world. He also designed and contracted the construction of a second home in LaBelle, FL which was enjoyed by Marv, Bev, family and friends. Marvin was preceded in death by his parents, his step- father, many aunts, uncles, cousins and one brother-in- law. Surviving Marvin are his wife Beverly, four brothers-in-law, Gerald (Sally) Sommer, Richard (Carolyn) Sommer, Douglas (Brigitte) Sommer, Donald (Susan) Sommer, a sister-in-law, Barbara Guetschow, many nieces and nephews, cousins Joan Vockel, Carla (George) Kennedy, Joyce Krall, Roselyn Krupa, Roger (Karen) Krall, Ray (Gloria) Wunrow, Roman Wunrow, and Janet (Gary) Weiler. Van Orsdel Funeral Chapel of Coral Gables, FL will handle the cremation arrangements. Marvin asked that his ashes be returned to nature. An online time of remembrance will be held at a later date. Online condolences can be posted at www.VanOrsdel.com. Memorial contributions may be given to The Rare Fruit Council International of Miami, FL, the math department of the University of Wisconsin (Madison, WI) or Indiana University (Bloomington, IN) or a charity of your choice.

Marvin Victor Mielke, Ph.D. of Coral Gables, FL died on Tuesday, February 23, 2021 at Vitas Hospice Care at the University of Miami Hospital in Miami, FL. Death was due to an aggressive cancer. Marvin was born May 2, 1939, the only child of... View Obituary & Service Information

The family of MARVIN V. MIELKE created this Life Tributes page to make it easy to share your memories.

Send flowers to the MIELKE family.