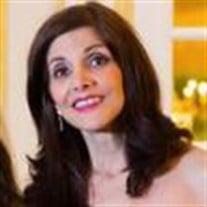 1955-2021 Maria Celeste Beguiristain Shohat passed away peacefully the morning of August 22, 2021, in her longtime home in Kendall, Florida. Maria was the first of 5 siblings born to Zoraida and Luis Beguiristain in Havana, Cuba. Maria immigrated to the United States when she was seven years old. Not only did Maria adapt quickly – she thrived, and eventually attended law school at Emory and the University of Miami, where she met her husband Ed Shohat (then an adjunct professor of Immigration Law), who survives her, along with her daughter, Lauren Elizabeth Gay (Andrew Gay), her son, Kevin Ross Shohat (Cecile Casutt von Batemberg), her grandson, Julian Ridge Gay (age 2), her brothers, Roger Beguiristain (Michelle Laurin), Carlos Beguiristain (Patricia Moya) and Oscar Beguiristain (Kimberly Hawkins), and her sister Cuqui Beguiristain (Manny "Mano" Nogueira), who, alongside Ed, and with a team of incredible caregivers, cared for Maria at home until the very end. Not only was Maria charmingly unaware of her disarming beauty – she was also deeply soulful and boundlessly warm. Her superpower was making everyone she encountered feel comfortable and special, and it was not unusual to find Maria deep in conversation with someone she’d met only minutes ago – a waitress at Roasters ‘N Toasters, a valet at Joe’s Stone Crab, a cashier at TJ Maxx (where, much to the bored dismay of her children-in-tow, she treated bargain hunting like an endurance sport). Maria grew up in a conservative, religious household, where she was socialized to remain poised and ladylike at all times, and anyone who knew her would describe her as such. But those who knew Maria well at some point caught a glimpse of an irreverent streak that exposed itself more frequently than she’d like to admit: an outright laugh at her children’s’ Beavis and Butt-head impressions, a poorly stifled smile while punishing them for a skillfully executed prank call, a secret pride in the comedic rap verse they wrote about a negligent nanny who spent the entire day on the phone (and who she later fired). Although Maria was a lawyer by trade, her many hobbies, from screenwriting to art to vivid storytelling, revealed her as a fundamentally right-brained thinker. Maria was dynamic and animated, and took great joy in music and movement. She was blessed with a beautiful singing voice, and even through her final days battling Alzheimer’s Disease, when she’d lost the ability to recognize her surroundings and most of her loved ones, she could belt out a Go-Go’s lyric every now and again, and - amazingly - she never lost rhythm. Anyone who knew Maria would tell you that her true passion was her children, who, in their words, “won the lotto” by getting her for a mother. Her dedication to them was unparalleled, and they cherish memories of her doing “all the voices” in the books she read to them on their “storybook couch”, collaborating on art projects, being “that carpool mom” who (both embarrassingly and amusingly) sang every word to Shaggy’s “Boombastic”, dancing wildly at any opportunity she got, and staying up until 2 a.m. gabbing with Lauren on the nights she came home from out of town, while drinking red wine and eating entire wedges of manchego. Alzheimer’s is a cruel disease that cut Maria’s time much too short, but her spirit lives on through her children, in their warmth and compassion for others, in their love for the arts, in the meals they cook and the lullabies they sing to the next generation of mischievous children who will hear countless stories of Maria for many years to come. In lieu of flowers, donations may be made to the Alzheimer’s Association.

1955-2021 Maria Celeste Beguiristain Shohat passed away peacefully the morning of August 22, 2021, in her longtime home in Kendall, Florida. Maria was the first of 5 siblings born to Zoraida and Luis Beguiristain in Havana, Cuba. Maria immigrated... View Obituary & Service Information

The family of Maria Celeste Beguiristain Shohat created this Life Tributes page to make it easy to share your memories.

Send flowers to the Shohat family.