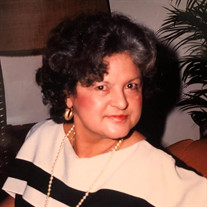 It is with great sadness that the family of Magdalen “Maggie” Bellamy announces her passing. At age 86, after fighting Alzheimer’s for 7 years, she passed peacefully in the company of her loving family on Wednesday, December 16, 2020. Born in Jászladány, Hungary on August 15, 1934, Maggie would eventually move to the US with the love of her life and settled in Miami, FL (she would live in Miami for 64 years). Months later she would give birth to her daughter Sylvia. Pursuing the American dream that she envisioned for herself and her family, she would encounter & overcome many challenges & sacrifices. Maggie was a strong and determined woman with perseverance, fueled by her great devotion and love for her family, this allowed her to achieve all that and more. She would reach these accomplishments by working at the Aluminair factory for 28 years, work at her husband’s mechanic shop as the head honcho and Chief Financial Officer, while simultaneously owning her own business for 47 years. Some family and friends would describe Maggie as fierce and sophisticated. You could find her dressed to the nines with a pair of high heels, gold hoops, and purse to match her shoes. She owned SO MANY shoes and power suits. Full of life and filled with smiles, more often than not she was happy and friendly. She took an interest in people, could strike up a conversation with anyone and would strike up a conversation with everyone. A few things that made Maggie so unique was never losing touch with her Hungarian heritage, she made the best Goulash in Miami that made many bellies happy. Maggie was always supportive and by her husband’s side, she would join him for his weekend races in Daytona as his #1 fan and supporter. Spectators knew of her because, as mentioned earlier, she could strike up a conversation with anyone. She had her own racing outfit and would strut in her heels and root on her husband from the sidelines. At night, if she wasn’t away at Louis’ races, she would be cozied up on the couch watching novellas and eating her midnight snack. Her memory will be imprinted in the minds and hearts of all who met her. Maggie, was a loving, caring, and supportive wife, sister, mother, grandmother and great-grandmother. She is survived by her sister, Agnes “Agi” Tall, child, Sylvia, three grandchildren Jennifer, Victor, and Nicole, and four grandchildren Vanessa, Jasmine, Isaiah, and Ethan. There will be a viewing for Maggie on Monday, December 21, 2020 at Van Orsdel in Coral Gables. Immediately after the viewing, a memorial mass will be held for Magdalen at St. Agatha Church at 11:30 AM. Interment will follow the mass at Our Lady of Mercy Catholic Cemetery. Thank you again for joining us in celebrating her life and keeping her great memory alive.

It is with great sadness that the family of Magdalen &#8220;Maggie&#8221; Bellamy announces her passing. At age 86, after fighting Alzheimer&#8217;s for 7 years, she passed peacefully in the company of her loving family on Wednesday, December... View Obituary & Service Information

The family of MAGDALEN BELLAMY created this Life Tributes page to make it easy to share your memories.

It is with great sadness that the family of Magdalen “Maggie”...

Send flowers to the BELLAMY family.