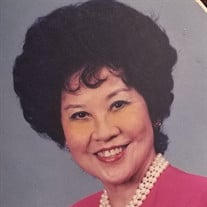 On Monday, January 11, 2021, Dr. Lucia Chang joined her husband with the Lord in heaven at the age of 88. She was born in Shanghai on May 1, 1932, and grew up in China. After WWII when the Communists took over, her family fled to Taiwan. There she attended National Taiwan University, and met her husband, Wen. They moved to Austin to attend the University of Texas, where she graduated summa cum laude, with a perfect GPA, with degrees in English and accounting. She later received her PhD in accounting from there as well. They moved to Miami in 1961, and her husband taught and did research at the University of Miami Civil Engineering Department for 38 years, many years as a full professor, until his death. He had the largest research grants at the University at the time, and was Vice-Chairman of the original Miami-Dade County Building Code Committee. Dr. Lucia Chang was one of the founding faculty members at the FIU School of Accounting in 1972, when the University began. For many years, she was the Associate Dean of Accounting, when the Department was nationally recognized, and a full professor. Her courses were well-known as being among the most rigorous and educational, and she helped train and mentor many accountants. She retired after 27 years, when her husband went to be with the Lord, and devoted herself full-time to God’s work. She and her husband financed and built a beautiful, large sanctuary on the campus of Riverside Baptist Church. There for 20 years, she funded and ran the Chinese Congregation at Riverside Baptist Church. Hundreds of Chinese, many from China, accepted Christ there. Despite having dementia for several years and several recent strokes, Dr. Chang continued to always enjoy life at home, and was always surrounded by family and friends. She is survived by 2 sisters and 3 brothers, one a Nobel Prize nominee; her son Richard Chang MD of Miami and her daughter Margaret Chang MD of New Smyrna Beach; their spouses Sunny and Jeff; and her grandchildren Helen, William, Lily and Christian. A viewing and funeral service will be held at Van Orsdel Kendall, 11220 N. Kendall Dr. on Monday, January 18th, 2021 at 11:30 am.

On Monday, January 11, 2021, Dr. Lucia Chang joined her husband with the Lord in heaven at the age of 88. She was born in Shanghai on May 1, 1932, and grew up in China. After WWII when the Communists took over, her family fled to Taiwan. There... View Obituary & Service Information

The family of Dr. Lucia Sun Chang created this Life Tributes page to make it easy to share your memories.

Send flowers to the Chang family.