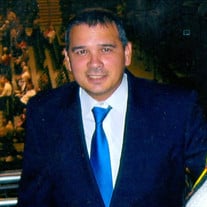 Louis Ernest Perez, of Miami Florida passed away on Saturday, September 18, 2021 after a long hard fought battle with Cancer and ultimately COVID-19. He was born in New York, NY on May 1, 1960. Louis attended Christopher Columbus High School, in The Bronx. He was enrolled in the NY National Guard before becoming an entrepreneur in several different areas. His business ventures included home alarm systems, intercoms, water filtration, and ultimately computers. He owned and operated his computer store in Queensbury, NY which was one of his biggest dreams. Louis enjoyed many hobbies and interests. In his teenage years he worked with his father in the restaurant business. There he began his lifelong passion for cooking. Louis could prepare any meal and wasn’t afraid of trying new things in the kitchen. His secret? Everything from scratch, even tomato sauce. Louis was very meticulous with everything he did, especially when eating a lobster. Not one bite would be left behind. If Star Trek or Star Wars were on tv, you had no chance of getting his attention. Everyone knew if that was on, Louis was unavailable. His grandmother would joke, “you could throw a bomb next him and he wouldn’t hear it!” It was true. No matter what life threw at Louis, he always had room for a dog. Having a dog was one of his greatest joys in life. There was never a time in his life when he didn’t have one. In his last years, Louis adopted Rex. A labrador-pit bull mix who thinks he’s a puppy. As Louis fought his cancer, Rex was always by his side. He followed Louis where ever he went especially on the hard days. His buddy, Rex, is going to miss him dearly. In his last two months, Louis became his father’s caretaker. He enjoyed cooking and preparing his meals and making sure his father got his exercise. Louis did not accept any protests. After both somewhat recovered from Covid, Louis asked his father, “what do you want for dinner, Pops?” His father said, “I could go for a lobster.” Louis went out and bought lobsters for dinner and prepared them to restaurant quality standards. This was one of their last meals together at home. Louis is survived by his father, Luis Perez; son, Jonathan Perez; daughter, Christina Perez; grandson, Lucas Perez; wife, Lidia Santiago; and sisters, Letty P. Ahmed and Melissa Perez. A Celebration of Life will be held on Thursday, September 23, 2021 at 2p-5p. In lieu of flowers, please make a donation to the American Cancer Society.

The family of Louis Ernest Perez created this Life Tributes page to make it easy to share your memories.

Louis Ernest Perez, of Miami Florida passed away on Saturday,...

Send flowers to the Perez family.