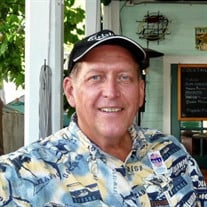 Les, as he was known, was a Miami native, a US Navy veteran, an entrepreneur and pioneer in the South Florida aviation community, and a big-shouldered, big-hearted, and loving husband, father, and grandfather. Les was born in Miami, Florida. He was the middle child and only son of Horace Lester Johnson and Florence Aileen Johnson (Ritchie). He grew up in the Little River neighborhood and spent most of his youth in and around Biscayne Bay with his lifelong friend David Patton. Later in life, the adventures he had with David would become cherished bedtime stories to his grandchildren in which he referred to the duo Crunch and Dez. David would later introduce him to the love of his life, his cherished wife, Kayla, whom he referred to as "my darling." Les attended Miami Edison High School where he graduated in 1958. Following graduation he entered the US Navy and was stationed on the USS Horace W. Gilmore out of Charleston, SC. Onboard the Gilmore, he learned how to repair airplane parts and rewind electric motors. After his Naval service he returned to Miami and worked in the electric motor industry. In 1972 he was one of the "original 5" who founded Aircraft Electric Motors. He worked there for the next 49 years until his death. During his career he attended national and international air shows and conventions, where he established friendships and business relationships around the world. Les and Kayla loved traveling to these shows and entertaining their clients, many of whom they counted as close friends. He loved building and growing the business with the Clot family (Bill and Josh) and his sons (Keith and Ritchie). He never missed a day of work, and was always there for the more than 100 employees that he considered family. Les is survived by his wife (Kayla Johnson), his six children: Keith Johnson (Dawn), Kenneth Johnson (Diene), Karin (Johnson)Fiera, AJ Ager (Kerri), Kersten Velez, Lester Ritchie Johnson (Carmen), his 11 grandchildren: Tristan Caruso (Jeuvi), Klay Johnson, Colby Velez, Lorelei Johnson, Hunter Ager, Cameron Velez, Delaney Ager, Melanie Johnson, Amelia Ager, Alyssa Johnson, Luke Ager, and his sister Linde Kennedy (Jim). He was predeceased by his parents and his older sister: Nancy Johnson. Services will be held at Christ the King Lutheran Church on October 3rd at 2:00 PM where Les and Kayla are members.

Les, as he was known, was a Miami native, a US Navy veteran, an entrepreneur and pioneer in the South Florida aviation community, and a big-shouldered, big-hearted, and loving husband, father, and grandfather. Les was born in Miami, Florida.... View Obituary & Service Information

The family of Lester Ritchie Johnson created this Life Tributes page to make it easy to share your memories.

Send flowers to the Johnson family.