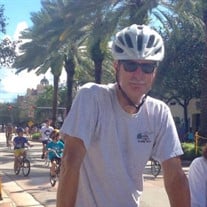 Leonard John Helmers, Jr. October 30, 1950 – June 12, 2021 Leonard (Lenny) Helmers, 70, of Sewall’s Point, FL died on June 12 following a long illness. A South Florida native, he was born and grew up in Miami Springs with his parents, Leonard (deceased) and Priscilla, and younger brother Terry. He graduated from Miami Springs High School and received his professional degree from the University of Miami, where he studied Civil Engineering. Lenny had a long and successful career as an engineer in the City of Miami Public Works Department where his projects included the original design of David Kennedy Park in Coconut Grove among many others. He was widely known and respected for his knowledge, expertise and, most importantly, his integrity in the performance of his professional duties. Lenny married the love of his life, Karen, in 1981, with whom he celebrated a 40th anniversary earlier this year. Lenny’s family was the center of his world - his love language was taking care of any and every practical project to make sure Karen and his daughter Allyson were comfortable, safe and secure. He was an avid outdoorsman who spent many happy hours with his family and friends camping throughout the United States, riding bicycles in South Florida and fishing the waters off Miami. He was also a gifted woodworker, creating beautiful furniture and intricately carved scale ship models. He brought his hobbies and talents with him to his new home of Sewall’s Point, FL, where he began his retirement years. Lenny was warm, funny, kind and the teller of an endless series of entertaining stories for his family and close friends. He will be missed deeply by all who were fortunate enough to know him. Lenny is survived by his wife Karen, daughter Allyson, brother Terry and wife Ann, nephew Dan, niece Caroline, aunt Marilyn Roebling and cousins Sally Roebling Gullett, Suzy Roebling, Tom Roebling, Shirley Roebling and Patty Roebling. Graveside services will be held at the Woodlawn Park Cemetery – North, 3262 S.W. 8th Street, Miami, FL, on Friday, June 18 at 11:00 am. Flowers are graciously accepted.

The family of LEONARD J HELMERS JR created this Life Tributes page to make it easy to share your memories.

Send flowers to the HELMERS family.