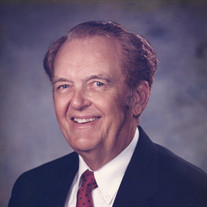 On December 8, 2020, Kelvin Henderson Keith, of Miami Springs, Florida, passed peacefully into the next chapter of his life. Kelvin was born in Duluth, Minnesota. He moved to Florida at age 5 with his parents Arthur Patterson Keith and Gladys Vivian Protteau Keith. He had an older sister Shirley Solem Holland and a younger brother Arthur Patterson Keith, Jr. – all of whom predeceased him. As a boy he attended the log cabin school house in Miami Springs. He attended Miami Senior High and graduated in 1939. After graduation he began attending the University of Miami in Coral Gables, Florida. While attending the University he took flying lessons. After obtaining his licenses and ratings he was selected for a pilot position with Pan American World Airways (Pan Am). While flying for Pan American, he obtained a Juris Doctor degree from the University of Miami School of Law. In 1962, he was approved to try cases at the Supreme Court of the United States of America. In 2004, he was recognized by The Florida Bar for his 50 years of membership with The Florida Bar. His career as a pilot for Pan Am started in 1942 at Dinner Key, where he first did his “touch and go’s” in the Consolidated Commodore Flying Boat. It was at Pan Am that he met his wife Mary Jane (deceased) of nearly 74 years. During World War II, while at Pan American, he was temporarily assigned to serve in the Air Transport Command division of the U.S. Army Air Corps flying mostly across the Atlantic Ocean to North Africa. In 1946, he was drafted into the Army. In 1947, after obtaining the rank of Sergeant and being decorated with the World War II Victory Medal, he returned to Pan American. Kelvin had an Air Transport Pilot rating and a Flight Instructor license. He had 12 type ratings and flew everything from the Consolidated Commodore Flying Boat to the Boeing 747. He also served a tenure as head of the local pilot union in Miami. As an airline pilot the only thing he placed higher than the safety of his aircraft was the safety of his passengers. In 1981, after 39 years, Kelvin retired as a Captain on the Boeing 747. At the time, the B-747 was the largest passenger aircraft in the skies. Kelvin was also a family man who loved and was devoted to his wife and his children. One of the highest compliments a man can receive is for someone to follow in his footsteps. Kelvin taught his oldest son Scott to fly. His son later became a Captain with a major airline. His daughter Sandra (deceased) became a Legal Assistant (Paralegal). His youngest son Mark (deceased) was a stalwart union man, President of his local union, and was long an advocate of the working class. As a result of his position with Pan Am, Kelvin was well travelled. He also travelled extensively throughout the world with his family including crossing the Atlantic on Concorde and sailing on the maiden voyage of the Queen Mary 2. In addition to his son Scott, Kelvin is survived by his daughter-in-law Debra, granddaughters Ashley and Tory, and many nieces and nephews. Visitation will be Monday December 14, 3pm-5pm at Van Orsdel Coral Gables, FL. Entombment with full military honors at Woodlawn Park North, Miami, FL will follow private services. Special thanks to Learna, and Dr. Rolando Mendizabal and his staff. Also special thanks to Rosie who assisted Kelvin and Mary Jane for 1 ½ years.

On December 8, 2020, Kelvin Henderson Keith, of Miami Springs, Florida, passed peacefully into the next chapter of his life. Kelvin was born in Duluth, Minnesota. He moved to Florida at age 5 with his parents Arthur Patterson Keith and Gladys... View Obituary & Service Information

The family of KELVIN HENDERSON KEITH created this Life Tributes page to make it easy to share your memories.

Send flowers to the KEITH family.