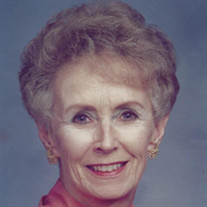 Josephine Nash Story 1920 - 2021 With sadness coupled with great thankfulness for all the blessed years, the children of Betty Story share the news of her passing, on Feb. 8, 2021 to be with her family at the Lord’s table, at the age of 100.. She passed away peacefully and at home. She is survived by her children, Linda Lubitz Boone and husband, Norman (Miami) and Graham and wife Regina (Atlantic Beach). Norm’s children Andrew and Anaelisa were always in her thoughts as were her 4 great-grandchildren whom she sadly never met. The tragedy of the COVID virus keeping families apart was profoundly felt. She was born in Huntington, West Virginia on Sept. 12, 1920, as the middle child of Herbert Nash and Josephine Thornburg Nash. She lived in Huntington until she went to college in Atlanta, at Agnes Scott, returning home to graduate from Marshall University. Her fond memories growing up in an extended family included sitting at the feet of her grandfather who read bible stories to her, her elder brother, Herbert and younger sister, Janie, and eating fresh vegetables picked from the back garden. She started what later would become a regular weekly tennis game when she was 9 years old and was the unofficial “mascot” of the Marshall University Tennis team. As a young woman, she also would fondly remember how often she would have 2 dates in the same day with different young men – we think the record was 4 in one day. She was selected as a West Virginia Spring Princess and still had the violet-colored velvet dress she wore. In her early 20’s, during the height of the Depression, her father lost his job and they moved to New York City for work. It was here that Betty started working at Colonial Airlines and met Bill Story, and they were married in 1943 in a quiet wedding ceremony, just a few months after she learned of the death of her adored older brother, a pilot who was shot down over Germany. Their family friend and minister, Norman Vincent Peale performed the ceremony. The celebration of their 50 years of marriage in 1993 was a joyous time. They moved to Manhasset, NY where they lived until 1968 raising their 2 children, Linda and Graham. While in Manhasset, Betty hit her stride as a community volunteer and became a leader in the public education world. She was President of the PTA (Parent Teachers Association). Later elected by the community to the School Board, only the 2nd woman to do so, she said one of her greatest benefits of that position was being able to hand Linda her high school diploma. She was slated to become the first woman President of the School Board however, Bill, who was working for Eastern Airlines, was transferred to Miami so off the family went – from snow to sun! Always an active tennis player, they quickly found a group of like-minded folks and their Tuesday night at Salvadore Park tennis courts with 3 other couples started, and continued for 30 years. She and Bill were avid UM football fans travelling across country to attend away games, when they were not attending Graham’s soccer games. Following Bill’s retirement in 1982 and until his death in 2000, they traveled the world with their final trip on the NCL Millennium cruise where they crossed the equator at midnight to the new century. As an active member of Granada Presbyterian Church, she was viewed as a godly woman who exhibited the characteristics of seeking God first, speaking faithfully, showing true beauty, staying humble and serving the Lord. She maintained her daily devotional readings until she became sight impaired several years ago. She was a loving, elegant, and much-admired lady but most of all, she was our mother whom we will miss dearly. A memorial service to celebrate her life will be held on Tuesday, March 16 starting at 4:30pm at Van Orsdel Family Chapel, 4600 SW 8th St. Coral Gables, FL. In lieu of flowers, please send donations to Agnes Scott College https://give.agnesscott.edu/ or Moody Bible Institute https://www.moodybible.org/givingapp/education?utm_campaign=ANNL

Josephine Nash Story 1920 - 2021 With sadness coupled with great thankfulness for all the blessed years, the children of Betty Story share the news of her passing, on Feb. 8, 2021 to be with her family at the Lord&#8217;s table, at the age of... View Obituary & Service Information

The family of JOSEPHINE NASH STORY created this Life Tributes page to make it easy to share your memories.

Send flowers to the STORY family.