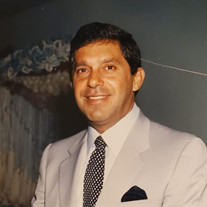 Jose L. Saumat (Pepe), 81, died of heart failure on May 15th, 2021 at his home in Miami, Florida. He was born on March 29, 1940, in Havana, Cuba, the son of Teofilo Sauma and Alicia Nasser. In 1957, he graduated with a degree in accounting, and soon after left Cuba for America. His first stop was New York City where he found his first job at Saks Fifth Avenue. In 1965, he moved to Miami, Florida. He was an executive for Spanish Advertising and Marketing before starting his career. He married his soul mate Irela Castillo and together they founded Kaufman & Roberts, an appliance and electronics company, and built a beautiful family. Success came easy to Jose. He was a natural leader and an incredibly savvy businessman. His motto was always “First one in, last one out.” He worked hard and inspired others to work hard as well. In doing so, he was able to build a company that had 1200 employees with 45 stores all over Florida. He never let anything hold him back. He took risks because he believed in himself and was confident in his decisions; it paid off. He was someone people respected and admired, and he leveraged his position to do good and give back to many organizations in South Florida. Jose lived life to the fullest. He made many important things happen in business and in the community, but the most important thing he did, the thing that made him feel the most accomplished, was being a father and grandfather. He took so much pride in his family and worked as hard as he did so that he could provide them with the best life possible. He was the kind of dad that always gave good advice and supported whatever decision made his children the happiest. All he ever wished for was that each of his children be happy, but more importantly, that they love and support one other. It would only be fitting that his final moment was opening his eyes to see his children standing by his side, and then closing them again to go peacefully with the Lord. Jose defied so many limitations throughout his 81 years on this Earth. He never took the easy way out and lived well beyond the years that doctors had said he could. He fought for his success, he fought for his family, and he fought to stay with us as long as he could. Perhaps this is why his absence will be felt so deeply. He lived and loved with everything he had. He leaves behind a legacy full of the love and passion he instilled in his children and grandchildren. He is predeceased by his son Jacques. He is survived by his wife, Irela, his sons Jose, Eric, Gino, Giorgio, and Giano; his daughter Gisel; his 13 grandchildren, Nicole, Sam, Jasmine, Jacques Jr., Amanda, Eric Jr., Jade, Giorgio Enzo, Alessio, Maddox, Nicolas, and Madelaine; his brothers Emilio and Jorge; and many nieces and nephews.

The family of JOSE L SAUMAT created this Life Tributes page to make it easy to share your memories.

Send flowers to the SAUMAT family.