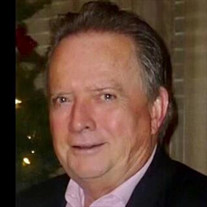 John Michael Riston, 78, of Coral Gables, Florida passed away peacefully, surrounded by family at his home on Friday, August 20th, 2021. He was the first of seven children, born to John Stoddard Riston and Dorothy Ann Britanik Riston on August 1st, 1943 in Bangor, Maine, and was raised in Murrysville, Pennsylvania. He graduated from Edinboro University and started his Information Technology career with IBM in Endicott, New York. John later went on to System One with Eastern Airlines in Miami, Florida where he worked on the development of the original online airline reservation system that everyone enjoys today. He retired from Electronic Data Systems (“EDS”) after a successful and fulfilling career. John was admired and respected by many and known for his ‘one-liners’ and his sense of humor. He was devoted to his wife and was the proud father of four daughters. He was a loyal friend and enjoyed playing golf and cards every Wednesday with the same group of friends for many years. He loved boating on Biscayne Bay and especially anchoring near Stiltsville with his wife, family, and friends. John and his brothers rode Harley-Davidson motorcycles and his favorite ride was the Miami to Key West poker run. John is survived by his wife of 40 years, Deborah (“Debby”) Larkin Riston, his four daughters, Stephanie Riston Jenks (and husband Jon, deceased) , Tracy Riston Katz (and husband, Steve), Michelle Riston Miller (and husband Patrick), Caitlin Riston, his 6 grandchildren, Tyler, Camron, Eli, Ava, Ella, and Chloe, and his six siblings, Janet Riston Beck (and husband Ed), Dave Riston (and wife Lynn), Wayne Riston (and wife Edie), Ken Riston (and wife Cindee), Jeff Riston (and wife Tracy), Dotty Riston Oltz (and husband Karl), and many nieces and nephews. John will be deeply missed, and his memories and legacy will be carried in our hearts forever. A Funeral Mass will be held on Thursday, August 26th, 2021 at 11:00am at the Church of the Epiphany in Miami, Florida, followed by a burial service at Our Lady of Mercy Catholic Cemetery in Doral, Florida. Afterwards, a Celebration of John Riston’s Life will be held at the Riston home for family and friends. The family requests in lieu of flowers, a memorial gift be made in support of Merkel Cell Carcinoma research. Dr. Paul Nghiem, MD, PHD and his team at The Seattle Cancer Alliance within the University of Washington supported John's care and is at the forefront of Merkel cell research in the country. You may make your gift online at: Give.UWMedicine.org/Riston.

John Michael Riston, 78, of Coral Gables, Florida passed away peacefully, surrounded by family at his home on Friday, August 20th, 2021. He was the first of seven children, born to John Stoddard Riston and Dorothy Ann Britanik Riston on August... View Obituary & Service Information

The family requests that memorial gifts be made in support of Merkel cell carcinoma research at UW Medicine. Give Online: give.uwmedicine.org/Riston