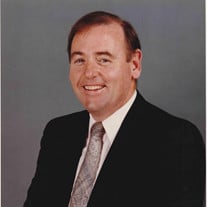 John Denny Burns passed away peacefully in his home on October 6, 2021. He was surrounded in his final moments by his two daughters, Christina and Catherine, and the undisputed love of his life, his wife Gloria. He is also survived by his granddaughter,... View Obituary & Service Information

The family of John Denny Burns created this Life Tributes page to make it easy to share your memories.

John Denny Burns passed away peacefully in his home on October...

Send flowers to the Burns family.