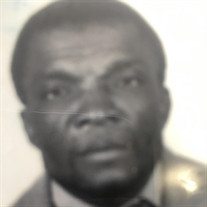 Jean Sony Senat 63, was born in Croix-des-Bouquets, Haiti on November 29th, 1957. He was the first born to a family of 10 children. He emigrated to the United States on June 29th, 1996. Sony was a small man with a big heart. He loved all and... View Obituary & Service Information

The family of JEAN SONY SENAT created this Life Tributes page to make it easy to share your memories.

Jean Sony Senat 63, was born in Croix-des-Bouquets, Haiti on...

Send flowers to the SENAT family.