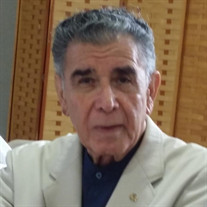 Dr. Hernan B. Julio-Varas, 92, a resident of Snapper Village for 35 years, died peacefully at home on April 12, 2022. He was born in Iquique, Chile on April 10, 1930 , son of Benigno Julio and Ida Varas. A lifelong learner, Dr. Julio graduated from Universidad de Chile with a Doctorate in Veterinary Medicine and was awarded scholarships to do advanced post-doctoral work in the United States, earning a Masters Degree in Public Health. He was married to Dr. Rosario Serrano, his high school sweetheart. He built a career working for the World Food Programme (UN/FAO) from 1968 doing relief work in Paraguay, Dominican Republic, Nicaragua, Pakistan, and the Islands of the South Pacific. He took early retirement after his post in Rome in 1985 and moved to Miami, making it his home. Dr. Julio was a member of Rotary Clubs in all his international posts and visiting member of many Rotary Clubs around the world. After his retirement, he found a home with the Coral Gables Rotary Club. During his tenure in the Rotary Club, he was awarded the Paul Harris Fellowship as well as an Honorary membership in the Rotary Club of Ayer, MA. He is survived by his loving wife of 65 years, Rosario; his two daughters, Maria Angelica and husband Carlos of Miami; Maria Eugenia and husband John of Carlisle, MA; and his three grandchildren: Angelica, Gabriel and Julian of Massachusetts. He enjoyed problem solving and puzzles, reading, collecting owl figurines from around the world, finding interesting eating “dives” off the beaten path and had a passion for roadtrips. Music was a source a great joy in his life—he enjoyed a wide range of genres including guitar and piano instrumentals, folklore from South America, classical and the crooners of his time. A celebration of his life will be held at Van Orsdel (11220 North Kendal Drive) from 2-5 on Friday, April 15, 2022. The family invites relatives and friends to come and share their memories. Condolences to the family may be expressed at www.VanOrsdel.com

Dr. Hernan B. Julio-Varas, 92, a resident of Snapper Village for 35 years, died peacefully at home on April 12, 2022. He was born in Iquique, Chile on April 10, 1930 , son of Benigno Julio and Ida Varas. A lifelong learner, Dr. Julio graduated... View Obituary & Service Information

The family of Hernan Benigno Julio-Varas created this Life Tributes page to make it easy to share your memories.

Send flowers to the Julio-Varas family.