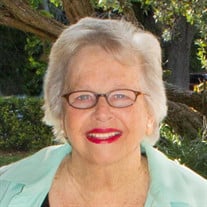 Gina Gaskins Murray passed away peacefully on July 7, 2021. She is survived by her husband of 57 years, John Murray, and five children—Mary Ann Hull, Cameron Murray, Karen Murray, Jean Hayes, and Bob Murray. She also is survived by her five grandchildren—Lily Hayes, Mia Hayes, Kyle Hull, Conor Hull, and Brilyn Kimen. As well as her brother Tom Gaskins, Jr. and several nephews and a niece. Gina was born in Arcadia Florida on May 15th, 1937 to Thomas Gaskins and Virginia Bible. She was raised on Fisheating Creek in Palmdale, Fl. There were horses, cows, raccoons, wild pigs, wild turkeys, and dogs. Her father and mother ran the Tom Gaskins Cypress Knee Museum on U.S. 27. Gina often helped out at the museum. Her childhood was full of adventures and excitement. After graduating from Moore Haven High School from a class of seven students, she promptly went to Florida State University where she graduated in 1959 with a degree in marketing. Shortly after graduating, she was hired by Delta Airlines in Atlanta, GA. It was a perfect job for her, since she loved to travel. Delta later transferred her to Coral Gables, Florida where she met her husband, John, while campaigning for a local politician. They were married in 1964 in Coral Gables at The Church of the Little Flower. She had a wonderful life and continued to travel with her husband as they raised their five children. She was a busy mother—PTA member, Band Booster volunteer, politically involved in conservative politics, and eventually working with her husband in his business, Murnor Studio, as the office manager and bookkeeper. Her gentle, bright smile always made people feel welcomed. Food was prepared seven nights a week. Her meals were fabulous and enjoyed by many. She was so giving and willing and there was always room for extra plates for any of the many friends her children brought home. When she started having grandchildren, she happily agreed to help out in many ways. Her husband and she drove all day and night to meet their firstborn grandchild, which sums up the kind of woman she was for all and their value for family. A funeral mass will be held Friday, August 6th at The Church of the Little Flower in Coral Gables, FL at 11 AM.

Gina Gaskins Murray passed away peacefully on July 7, 2021. She is survived by her husband of 57 years, John Murray, and five children&#8212;Mary Ann Hull, Cameron Murray, Karen Murray, Jean Hayes, and Bob Murray. She also is survived by her... View Obituary & Service Information

The family of GINA GASKINS MURRAY created this Life Tributes page to make it easy to share your memories.

Send flowers to the MURRAY family.