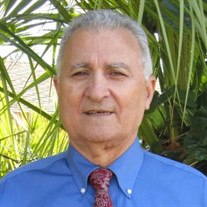 George Chukrallah Habib, devoted husband, father, and proud Orthodox Christian, fell asleep in the Lord on May 4th, 2022, at his home in Miami, Fl. He is survived by his beautiful wife, Tabte AbouRjaily Habib; his daughters Jamal, Mona, Cathy and her husband Logan Ruff; his sister Latife Zyne; his loving nephews and nieces Alexander Zyne, Georgette Stein, Nicholas Zyne, Charles Zyne, Nada Tobchrany Khalil, and Georges Tobchrany; and his beloved family in Lebanon. He is predeceased by his sister Elaine Tobchrany, his brothers Halim Habib and Michael Habib, as well as his brother-in-law George Zyne. George was born in Abadieh, Lebanon on November 3rd, 1941, to Chukrallah Mikhael Habib and Jamily AbouRjaily Habib. He came to the United States in 1961, crossing the Atlantic by ship, to settle in Miami where his sister, Latife, and her husband George Zyne, were already residing. One of his first, and most memorable, jobs was as a parking lot supervisor in downtown Miami where he met many notable Miami attorneys, legislators, and even the state governor. During this time, he took night classes, studying electronics, mechanics, aviation, and metalworking. Later, he returned to Lebanon to bring his beloved Tabte home to Miami with him. They were married in December 1968, at Saint George Antiochian Orthodox Cathedral, of which he was a cornerstone of the church. Ever a hard worker, George was dedicated to excellence, honesty, and loyalty: traits that he instilled in his daughters Jamal, Mona, and Cathy. He was well respected at each job he held for his virtuous character, his deep knowledge on every subject with which he busied himself, and his talent at sharing both virtue and knowledge with others in such a way that made them feel as though they possessed those same attributes. In his free time, George loved to cook, invent, and entertain his friends and family. A wonderfully skilled jack-of-all-trades, he loved to solve unique and challenging problems with his handiwork and ingenuity. A metalworker by trade, George loved to create beautiful and functional works of art; many of his pieces can be admired throughout Old Miami, Coral Gables, and in his own home. In retirement, George enjoyed learning to use and create with social media, and was thrilled in reconnecting with his friends and relatives, boasting contacts from every corner of the globe. Those who met George were often delighted to learn that first impressions really are deceiving, as George was slow to anger, quick to forgive, and glad to call everyone who knew him “friend”. Kindness, patience, and compassion defined George in his relationships, and he took great joy in sharing stories – which he could deliver in fine detail, as well as easing a tense mood with a swift and appropriate joke. George could make anyone smile and loved nothing better than a room full of laughter. Saint George, his patron, clearly favored George with virtue, wisdom, and justice. Ever quick to defend the weak and to fight for what he believed was right, George was a paragon of his namesake. His spiritual roots as a devout and devoted Orthodox Christian were laid down in Abadieh, Lebanon, where, in his youth, he served the church his family founded as an acolyte. After arriving in Miami, George stayed active in the church at Saint George Antiochian Orthodox Cathedral as an active member in the young adult organizations and loved to fill the church with the sound of his full, rich voice, having come from a long line of chanters including his father and uncles, he shared his talent under the guidance of the Very Reverend Father Michael Husson. His melodies were enjoyed not only by churchgoers, but also those who visited his FaceBook page. George will be honored at Saint George Antiochian Orthodox Cathedral in Coral Gables, Fl. on Tuesday, May 10th, 2022, for funeral services at 7 pm with burial to follow at Woodlawn South Cemetery in Kendall, Fl. on Wednesday May 11th, 2022, at 12 pm. May his memory be eternal! May God rest his soul! May he know how much he is loved and missed by all! Lord have mercy! Lord have mercy! Lord have mercy! The Habib family would like to express their most sincere appreciation for the community. No words can ever express the depth of gratitude felt for the love and support afforded to them by this community during their hour of grief and need. May the Lord bless you and keep you, each and every one of you. Al Maseeh Qam! المسيح قام

George Chukrallah Habib, devoted husband, father, and proud Orthodox Christian, fell asleep in the Lord on May 4th, 2022, at his home in Miami, Fl. He is survived by his beautiful wife, Tabte AbouRjaily Habib; his daughters Jamal, Mona, Cathy... View Obituary & Service Information

The family of GEORGE CHUKRALLAH HABIB created this Life Tributes page to make it easy to share your memories.

Send flowers to the HABIB family.