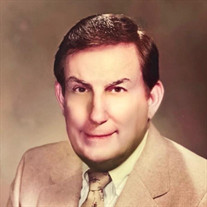 Donald A MacInnes, Sr. of Miami, FL passed away on Thursday, January 14th, 2021 at the age of 92. He died peacefully within his home surrounded by family which was his dearest wish. He is with our Lord now and the love of his life Esther Maria Gonzalez MacInnes, his wife of 64 years. Don was born on August 29, 1928 to Henry A. MacInnes of Charleston, SC and Mary Leonard of Savannah, GA at Riverside Hospital in Miami, FL. He attended Shenandoah Elementary and Junior High School and Miami High School. He played football and was treasurer of Miami High Alumni Association for 10 years. He was the Chairman of the Class of 1947 Reunion every 5 years starting with the 40th through 65th. He attended the University of Florida from 1947-1952, 1954-55 and earned a Business degree with a major in Accounting. Don was a member of the Student Council, Sigma Nu Fraternity, and the Intramural Sports Chairman. He was voted the all-star touch football player 5 of 6 years played. He was elected to the Alumni Hall of Fame of the Sigma Nu Chapter. Don was the Past President of the UF Alumni Association of Dade County. Don loved his Florida Gators with an intensity and pride known to all. His wife Esther, all six of his children, numerous grandchildren, nieces, and nephews all attended UF with Papa (Uncle Don) as the Gator Patriarch. Our father’s accomplishments were many to say the least. He was a CPA and Partner with Ring, Mahoney and Arner (1955-1965) who merged with Lybrand Ross Brothers and Montgomery (1969-1985). The name was then changed to Coopers & Lybrand who merged with Price Waterhouse/Coopers. Upon retirement from the accounting firm, he joined the Ed Morse Automotive Group as VP and CFO. During his time there, from 1985 to 1999, the Group grew from 3 dealerships to 30 by his second retirement. Twice during that time, the Morse Group was the largest volume dealer group in the country. Don was also a member of the AICPA, FICPA and Past President of the Dade County Chapter 1975. We cannot overstate how much our Dad’s Public Accounting and Ed Morse family loved and respected him. He was an inspiration to so many and enjoyed these friendships until the very end. Don was a member of the Riviera Country Club and Past President (1984-1985). He was the past President of the Miami Kiwanis Club and Lt. Governor of 17th Division of Kiwanis Miami. This was the largest single Kiwanis Club in the world when he was President. He was a member of Epiphany Catholic Church and treasurer of the Home and School Association. Don was also the Past President of Christopher Columbus High School Parents Association (1978-1980). He was a dedicated coach of Khoury League Baseball for 15 years when his five sons played, and in later years, he coached his grandson Ryan with his son Hank. He was the Past President of the Inter-Professional Council of South Florida, Member of the Executive Association of Greater Miami, and the University Club of South Florida. He enjoyed being Treasurer of the Pinecrest Garden Club and was always well received as an auctioneer for the Annual Gilded Lilies luncheon. His service to our Community was great and he treasured the many relationships that he formed along the way. Don was a military veteran, and we thank him for his service. He was a Retired Major in the USAR, United States Army after receiving a commission from ROTC at the University of Florida. He married his beloved Esther Maria Gonzalez MacInnes in a double wedding with Esther’s sister Gloria and Alan Tyson on August 17th, 1952. The ceremony was at the Gesu Catholic Church in Miami and at the time, it was the largest wedding that Miami had ever seen. Don is survived by many, including 6 children: Donald Alfred, Jr., David Alan (Maria), RobRoy McGregor (Brenda), Dennis Michael (Diane), Henry Alfred (Nicole), Ellen Marie (Anthony) and 15 Grandchildren: Chris (Missy), RobRoy, Jr. (Alex), Nathan, David Alan, Jr., Matthew, Colleen (Tony), James, Erin (Keith), Ginger, Jack, Sean, Ryan, Michael, Alexa, and Madison. 9 Great Grandchildren: Lily Anne, RobRoy III, Rylan, Riley, Brayden, Noah, Soren, Keith Lucas, and Rowan. He always considered himself first as a father and family man of a large and loving family, and second as a CPA and businessman who provided for his family. Don always went out of his way to make others feel special and cared for. He left a lasting, uplifting impression on everyone he met. We could not have asked for better parents. They epitomized family, Catholicism, love, hard work, and dedication. We are truly blessed to be a part of this family. The lessons he taught us and the examples he set for us, and there are so many, are the values we will pass on to our children. He is forever in our hearts and his legacy lives on in his children, grandchildren, great-grandchildren, family and friends. Although we are deeply saddened, he will always be our “Papa.” A Visitation at Van Orsdel Funeral Home, 4600 SW 8th Street, Coral Gables, FL will be held Thursday, January 28th from 3:30 to 6:30pm and a Mass at the Church of the Epiphany, 8235 SW 57th Ave, South Miami, FL on Friday, January 29th at 12:00pm. This is the link to livestream the service https://youtu.be/EYlS3C22OGI In lieu of flowers the family is asking that contributions be made in honor of Donald A. MacInnes to the University of Florida Education Fund. Donations can be made via check payable to Gator Boosters, Inc. indicating such and mailed to Gator Boosters, Inc., Attn. Garrett Bell, PO Box 13796, Gainesville, FL 32604 or by phone call to Garrett Bell (352) 692-6023.

Donald A MacInnes, Sr. of Miami, FL passed away on Thursday, January 14th, 2021 at the age of 92. He died peacefully within his home surrounded by family which was his dearest wish. He is with our Lord now and the love of his life Esther Maria... View Obituary & Service Information

The family of DONALD ALFRED MACINNES created this Life Tributes page to make it easy to share your memories.

Donald A MacInnes, Sr. of Miami, FL passed away on Thursday,...

Send flowers to the MACINNES family.