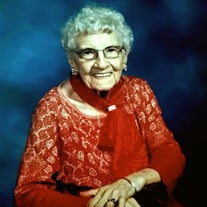 Claire M. Penniman, 96, of Stuart, died on November 18 of complications from a stroke. She was attended in her final days by her three sons from Massachusetts. Claire was born February 11, 1925, in Lowell, Mass. Her parents, Louis and Rosanna (Carignan) Bordeleau, were immigrants from Trois Rivieres, Quebec. She was the youngest of 12 children, all of whom predeceased her. She cared for several of her sisters in their later years. She was also predeceased by her former husband Merton A. Penniman. Claire is survived by her sons, Bruce and his wife Valerie, Wayne, and Keith and his partner Elaine Bomford; her grandchildren Rebecca Stetzer, Abigail Everingham, Christopher Penniman, Alyssa Poirier, Leah Penniman, Naima Penniman, Allen Penniman; and 11 great-grandchildren, as well as numerous nieces and nephews, neighbors, and friends. Claire lived at the Vista del Lago condominium complex and was a member of the Prince of Peace Lutheran Church in Stuart. In both locations, she was known as “a friend to all.” She frequently hosted card parties and music nights at her condo and was the “queen of coffee” at Prince of Peace, where she also served on Church Council and attended Bible study. She was an enthusiastic musician, playing the organ, the guitar, and, famously, the spoons. She was also known for her ability to yodel. Claire overcame many obstacles in her early life to achieve her professional goals. Raised in a time when education for girls was not a priority, she was forced by her family to leave school at age 16 to go to work. During World War II, she served as a Woman Ordnance Worker at Fort Devens, Mass., where she tested halftrack, tank, and airplane engines on a dynamometer. She met her husband while working there. After her divorce, she moved to Florida to be closer to her siblings and returned to school to earn her high school equivalency diploma and her Licensed Practical Nurse credential. She worked at the Osteopathic General Hospital in North Miami Beach for many years. After retirement, she moved to Stuart, where she lived for 22 years and tended her small garden. Although she was not a frequent traveler, Claire took several memorable trips with family members, including a Mississippi River cruise (on which she repeatedly quizzed the sailors about the mechanics of the paddlewheel) and a 75th birthday tour of western national parks (during which she gamely completed a lengthy sunrise hike to the Delicate Arch in Utah). As recently as June 2021, she traveled to Massachusetts by herself for a family anniversary party. The flight reactivated her lifelong fascination with aviation and her admiration of the barrier-breaking pilot Amelia Earhart. As a child of the Great Depression, Claire was frugal and resourceful. She was an expert at recycling and repurposing materials long before it became fashionable. She lived simply but loved quirky objects such as musical clocks and singing dolls. She also had a wry sense of humor. A memorial service will take place at Prince of Peace Lutheran Church, 2200 NW Federal Highway, Stuart, FL 34994, on Friday, December 3, at 2 p.m. For more information, call (772) 692-1171. Memorial contributions may be made to the Prince of Peace Lutheran Church or to Treasure Coast Hospice, 1201 SE Indian Street, Stuart, FL 34997.

Claire M. Penniman, 96, of Stuart, died on November 18 of complications from a stroke. She was attended in her final days by her three sons from Massachusetts. Claire was born February 11, 1925, in Lowell, Mass. Her parents, Louis and Rosanna... View Obituary & Service Information

The family of Claire M. Penniman created this Life Tributes page to make it easy to share your memories.

Claire M. Penniman, 96, of Stuart, died on November 18 of complications...

Send flowers to the Penniman family.