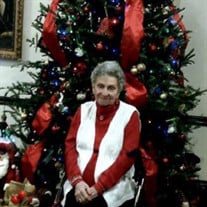 On Monday, December 20, 2021, Claire Rosella Holland went home to be with the Lord at the age of 88. Claire was born in St. Louis, Missouri in May of 1933. She graduated from Mehlville High School also in Missouri. She loved music and singing, and she learned how to play both the piano and organ. After graduating, she worked at Famous Barr Department Store. She met Joseph (Joe) Holland through church. They enjoyed boating and the outdoors and Claire would water ski on the Mississippi river with Joe driving the boat. They fell in love and were eventually engaged to be married before Joe served in the United States Army during the Korean War. After his return, they were married in 1955. They traveled to Miami, Florida on their honeymoon. They fell in love with the climate and wanted to be closer to other relatives which had already moved to Florida. They returned to Missouri, packed up their belongings and headed South with their boat in tow, leaving the cold winters of Missouri behind. After moving to Miami, she worked as a teller at Merchant’s Bank. She and Joe purchased their first home in 1957 and would stop by to check on the progress of the construction of their new home. That was their forever home on this Earth. They never relocated because they truly loved where they had chosen to live. In 1960, Claire and Joe were blessed with their first child, Pamela. In 1963, their second child Parry was born. Claire worked as a secretary at Gateway Baptist Church. Her responsibilities included assembling the weekly bulletin and getting it printed for the church service that week. She also loved singing in the church choir. Later, she worked in construction operating a frontend loader and driving a large dump truck. When Claire retired, she began volunteering in the library at Cypress Elementary, which was her grandson’s school. Claire was a wife, mother, grandmother and great grandmother. She was affectionately known as “Nanny”. She provided care for both of her grandchildren, whom she adored, while their parents were working. Claire loved children. She would wave to them any time she would see a child. Whether it be at a grocery store, in the neighborhood or a special event, she always tried to share a smile or simple wave to a child. She loved to sit outside every year on Halloween, just to see the children in their costumes and give them a special treat. An active, vibrant, truly caring and fun-loving person. Claire always believed in being kind to others. Gardening and knitting were also a favorite past time for Claire. She would knit blankets for any friend or relative expecting a new baby. She made beautiful pillows, blankets and sweaters for her home and relatives. Over the years, Claire and Joe traveled with their family across the United States. First camping in tents, then in travel trailers and later motorhomes. They loved visiting relatives, National Parks, and anything of interest in between. They also enjoyed camping by the beach over at the Red Coconut RV Park in Ft. Myers, Florida. An excellent cook, Claire would treat her family to traditional holiday dinners. Her favorites were Thanksgiving and Christmas. Decorating her home and making sure that everyone had a delicious meal. She would bake pies, cheesecake, cookies, and dinner with all of the trimmings. She wanted to make sure that everyone had their favorite foods to eat. She was known for making a delicious German potato salad which was a family recipe handed down through generations. Her daughter still makes it to this day. Claire always kept a smile and was friendly and helpful to her neighbors over the years. Whether it be welcoming a new neighbor to the area or just visiting with neighbors and sitting on the porch for a nice cold glass of lemonade. She could also be spotted walking with her neighbors to get some exercise. Claire was preceded in death by her mother, Ruth Kemper and father George Kemper; her husband Joseph; her two sisters Virginia Krato and Ruth Burris; her two brothers Glenn Kemper and Kenneth Kemper. She is survived by her daughter, Pamela Patterson (husband) Robert Patterson; her son, Parry Holland (wife) Tammy Holland; her two grandchildren, Shawn Patterson (wife) Mallory Pomar; Chris Patterson (wife) Giselle Vergara and her great grandson Jordan Patterson, along with many nieces, nephews and cousins. In Lieu of flowers the family requests donations to go to St. Jude's Children's Hospital.

On Monday, December 20, 2021, Claire Rosella Holland went home to be with the Lord at the age of 88. Claire was born in St. Louis, Missouri in May of 1933. She graduated from Mehlville High School also in Missouri. She loved music... View Obituary & Service Information

The family of Claire Rosella Holland created this Life Tributes page to make it easy to share your memories.

Send flowers to the Holland family.