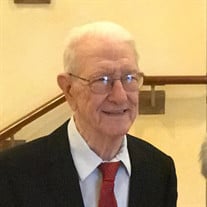 Mr. Buttacavoli was born in New Jersey in 1924 to Frank (1894) and Harriet (1893) Buttacavoli, and lived with his family in the New York/New Jersey area, graduating from Bloomfield High School and attending Stevens Institute of Technology before the family moved to Miami in the late 1940’s. There he met and married Rosaria Calabrese, his wife of over 70 years, in 1951. They moved with their young family to their first home in 1955, near St. Michael the Archangel Church, where they lived until moving to Pompano Beach in 2019. He worked for Varney’s, a plastics manufacturing business in Miami in the early 1950’s until moving to the restaurant industry, co-owning the Chick Inn Restaurant on SW 27th Avenue and 10th Street in Miami. In the early 1970’s, he joined his wife and accepted a position in the Tax Collector’s Office in the Miami-Dade County Finance Department, where he worked as the County’s primary liaison to the independent branch agencies that sold auto tags and other recreational licenses, until his retirement in 1992. He is survived by his wife Rosaria (Calabrese), children JoAnne (Andrés Pumariega), Frank (Mayra Buttacavoli), and Ciro (Ellen Kessler), 7 grandchildren, and 4 great grandchildren, plus 2 more on the way. He has several nieces and nephews, all children of his wife’s sisters. His sister Josephine (1917) preceded him in death in 2005. Mr. Buttacavoli was an avid sports fan; especially thoroughbred horse racing, which he enjoyed watching live at whichever South Florida racetrack was running during that time of the season. Since his retirement, he enjoyed a simple and unburdened life with his wife and family, relishing in their life events, milestones, and accomplishments. He took great pride in the foundation he laid for his children that stressed the importance of education and dedication to family. His legacy will live in the kind, compassionate, and generous way he treated those that he interacted with; especially those that served him in any way, including grocery store employees, restaurant staff, and healthcare providers. Thankfully, he was able to remain sharp of mind and wit until the end, enriching his family and those with whom he interacted, with the wonderful memories and stories of a life well-lived. People around him were amazed by his ability to recall events from 80 or even more years ago, making them feel like the events were happening in the present. In lieu of flowers, the family requests donations be made in Ciro C. Buttacavoli’s memory to the Missionary Sisters of Charity of Mother Teresa, 727 NW 17th Street, Miami, Florida 33136.

Mr. Buttacavoli was born in New Jersey in 1924 to Frank (1894) and Harriet (1893) Buttacavoli, and lived with his family in the New York/New Jersey area, graduating from Bloomfield High School and attending Stevens Institute of Technology before... View Obituary & Service Information

The family of Ciro C. Buttacavoli created this Life Tributes page to make it easy to share your memories.

Send flowers to the Buttacavoli family.