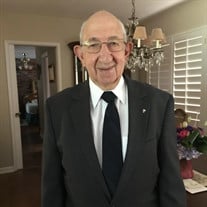 Camille Paul Gilbert passed away on April 3, 2022 at his home in Miami, Florida. Born in Windsor, Ontario, Canada on October 20, 1931. He moved to Miami in 1957 with his beloved wife, Theresa Yunis Gilbert. There they raised three children Margaret Ann, Ken and Bruce surrounded by a large, loving family and lifelong friends. Camille and Theresa were founding members of Our Lady of Lebanon Maronite Catholic Church. Camille was active in every aspect of church life and was a member of the Knights of Columbus. The annual Lebanese Festival was where he devoted much of this time and talents. Now in its 43rd year, the festival is the most important fundraiser for the church and Camille’s involvement was instrumental in its success. In recognition of his service to Our Lady of Lebanon, Camille was inducted into the Order of St. Sharbel. On November 7, 2009 Camille was appointed by Pope Benedict XVI to the Order of St. Gregory. This high honor is bestowed upon Catholic men and women in recognition of their personal service to the Pope and the Catholic Church. The ceremony was held at Our Lady of Lebanon Maronite Cathedral in Brooklyn, NY which is the home of the Eparchy of St. Maron. Many of Camille’s family and friends traveled to NY to attend the beautiful ceremony. Camille was an active member of the Salam Club of Miami for more than 50 years. This charitable foundation, comprised of members of Syrian, Lebanese and American descent, donates thousands of dollars each year to local charities. Camille was an independent distributor for the Miami Herald for 40 years before his retirement. While always proud of his Canadian heritage, Camille was thrilled to become an American citizen in 1998. In addition to his loving wife, Theresa, Camille was predeceased by his parents, sisters and brothers-in-law Ann and Jim Assef, Julie and Fred Hello, Barbara and Marshall Johns, Charlotte and Leon Rose, Georgette Gilbert, Charlie and Rosie Gilbert. He is survived by his children, Margaret, Ken (Betty) Bruce (Courtney) and grandsons Matthew (Molly) Andrew, Jeffrey and Nate. He is also survived by his siblings Lucy Sobcyzk, Robert (Heather) Gilbert, Larry Gilbert and Cathia Riley, brother and sisters-in-law Dolores Sirgany, Shirley and Robert Yoham, Diane and William Barimo, Michael and Laure Yunis, numerous nephews, nieces and friends. In lieu of flowers, the family requests donations to Our Lady of Lebanon Maronite Catholic Church, 2055 Coral Way, Miami, Florida 33145.

Camille Paul Gilbert passed away on April 3, 2022 at his home in Miami, Florida. Born in Windsor, Ontario, Canada on October 20, 1931. He moved to Miami in 1957 with his beloved wife, Theresa Yunis Gilbert. There they raised three children... View Obituary & Service Information

The family of Camille Paul Gilbert created this Life Tributes page to make it easy to share your memories.

Send flowers to the Gilbert family.