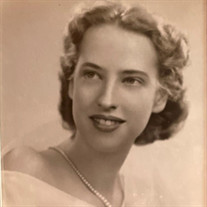 Beatrice Porter George, aged 91, of Miami, loving mother, grandmother and great-grandmother, passed away at home surrounded by family on April 3, 2022. Bea was born the youngest of four girls in Port au Prince, Haiti, February 22, 1931, to a Navy family. She met Joseph P. George, an 8th Army Air Corps veteran, while in nursing school at St Elizabeth’s Hospital in Washington, DC. They married the day after he was graduated from Georgetown medical school in 1953. They settled near his family in Miami. There, Bea wrangled six kids and many of their friends into adulthood during the tumultuous 60s and 70s. She loved making others feel welcome in a new home which she subcontracted during its building in 1968. Her gregarious nature, grace and servant’s heart made her home a haven for those in need. Her friends, neighbors and family will remember the warmth of her counsel and plenty of her gourmet dinners and parties. She loved to sew and paint, and spent endless hours landscaping and tending to her orchids and roses. She was active in her church, sewing and beading vestments for the clergy. She served as Chairman and President of the Dade County Medical Association Auxiliary and directed many school and church fundraisers. In addition to her loving husband, Joseph, Bea is preceded in death by her three sisters, Mary Louise Porter Clementson, Helen Swenson Porter and Esther Porter Creamer. She is survived by her three sons, Joseph Jr, (Elena) Michael (Ilisa) and Stephen (Teresa) and three daughters, Lisa, Carla (Mike), and Mary Ann (Scott), 13 grandchildren and two great-grandchildren. Visitation will be on Thursday, April 7, from 5-10 p.m. at The Van Orsdel Funeral Home, 11220 North Kendall Drive, Miami, FL, 33176. In lieu of flowers, the family requests donations to Our Lady of Lebanon Maronite Catholic Church.

The family of Beatrice Porter George created this Life Tributes page to make it easy to share your memories.

Send flowers to the George family.