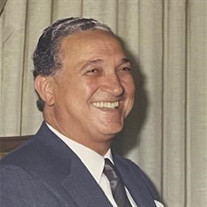 Armando Jesus Lopo was called home to eternal rest on February 13, 2022. He was born in Havana, Cuba, on October 27, 1926 to Segundo Lopo and Maria Seoane. He was 95. He was the youngest of 13 brothers and sisters whom he loved dearly. Armando graduated from the Maristas in Havana and from the University of Havana where he majored in accounting. In 1950, after a three year courtship, he married the love of his life, Emma Gonzalez, and started an adventure that would last for almost 69 years of marriage. Together, they created a wonderful family - with three daughters who survive him: Alina Lopo (Steve Wolfe, dec.) of Sherman Oaks, CA; Diana Lopo (Maryellen Tria) of New York City, NY, and Emma Lopo-Sullivan (Dan Sullivan) of Alexandria, VA. Armando is also survived by two beautiful grandchildren, Christopher Wolfe of Chatsworth, CA, and Emma Sullivan of Alexandria, VA, whose favorite vacation destination was Camp Abuelos - a place where Abuelo never said no and every day was an adventure. Armando cherished his role as grandfather and made sure that he worked to perfect it – whether it was ‘creating’ a hurricane while the grandkids were on a raft in the pool, endless viewings of Winnie the Pooh videos, or trips to Spain to teach the grandkids about their heritage. Shortly after getting married, Armando launched his own CPA firm in Havana. Armando was also involved in various business ventures in Cuba, most notably in the importation of British double decker buses to Cuba in what was then the single largest contract signed by Leyland Motor Corporation. Emma and Armando fled Communist Cuba in early 1961 with their girls and settled in Miami, starting all over again in the US, a country they dearly loved for welcoming the Cuban diaspora. Together, they set out to capture the American Dream and rebuild the life they had lost to communism. In the 1960s, among several business ventures, Armando became involved in the then fledgling cruise industry. It was a match made in heaven – travel, wine, food, and negotiating all over the world. Soon, in addition to cruise ships, came accommodation rigs in the Gulf of Mexico and the North Sea. He stayed involved in the industry decades after retiring. Many former employees stayed in touch with him as they appreciated the many opportunities he had provided them and his generosity through the years. Emma and Armando traveled the world and cruised the seas, visiting over 75 countries on 5 continents. They continued their travels well into their 80s, visiting old friends and making new ones. Armando's positive view of life was contagious. He absolutely loved life and brought a smile to everyone with whom he came in contact whether they be family, friends, employees, clients, a seatmate on a plane, or a fellow player at a roulette table. In retirement, he turned his attention to helping St. John Bosco Catholic Church build a new church, encouraging many Cuban exiles who had worshipped there upon first arriving in the US - as had he - that they needed to contribute to provide a place to worship for the generations of new arrivals. The altar crucifix at the new church was donated to celebrate Armando and Emma’s 50th anniversary and the statue of St. Joseph was donated by Emma and Armando. Armando never imagined that he would live through a pandemic but did so with a sense of humor and celebrated his 95th birthday surrounded by his family, with a piñata and champagne. Armando was pre-deceased by the love of his life, Emma, and his siblings: Manolo, Adolfo, Mercy, Amparo, Angelica, Margot, Maria Luisa, Josefina, Maria de Jesus, Segundo, Ana Maria, and Fernando. In addition to his daughters and their spouses, his grandchildren, and his brother-in-law and sisters-in-law, he is survived by many nieces and nephews. After Emma's passing, he was lovingly cared for by 4 caregivers to whom we are most grateful: Marina, Maritza, Nora, and Lizeth. Friends may call on Friday, March 4th from 5 to 7 pm at Van Orsdel Chapel 4600 SW 8th Street. A Mass of Christian Burial will be celebrated on Saturday, March 5th at 1:30 at St. Augustine Catholic Church at 1400 Miller Road, Coral Gables. Charitable donations in his memory may be made to the Cuban Maristas Alumni Association, 8567 Coral Way, Suite 208, Miami, FL 33155-2335.

Armando Jesus Lopo was called home to eternal rest on February 13, 2022. He was born in Havana, Cuba, on October 27, 1926 to Segundo Lopo and Maria Seoane. He was 95. He was the youngest of 13 brothers and sisters whom he loved dearly. Armando... View Obituary & Service Information

The family of ARMANDO JESUS LOPO created this Life Tributes page to make it easy to share your memories.

Send flowers to the LOPO family.