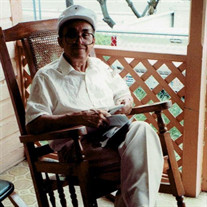 Armando Gonzalez was born in Banes, Oriente, Cuba in October of 2017. He was the son of Antonio Gonzalez and Brigida Lopez and one of seven children. As a young man in Cuba he was a carpenter by trade and worked for an American company where he built fine home furnishings. He married Elsa Rojas, a girl from his hometown whom he enjoyed dancing with at social gatherings. Upon completon of a training program, Elsa became a seamstress making fine clothing. They had two daughters, Elsa and Sylvia, two years apart. A gifted craftsman, he built their family home and raised their girls until the political tide began to change in Cuba. A friend of Armando's warned him about a rising communist revolutionary by the name of Fidel Castro and that turmoil and revolution was imminent. He urged him to get this family out of Cuba as soon as possible. In 1952 he began the application process. In 1955, he and Elsa were granted permission to enter the United States but had to leave their young girls in the care of family until they could raise the funds and meet the requirements for bringing them over. They moved to the Bronx in New York and were sponsored by his niece, Eva, renting a room in her apartment. Armando took a humble job at a restaurant called Sea Fair. He cleaned fish, washed dishes and mopped floors. He also attended a school where he learned English. Meanwhile, my grandmother worked as a seamstress for a company called Star Children creating beautiful upscale children's clothing. The girls finally joined them in 1958, just a few months shy of when Castro would take over Cuba. They moved to a fifth floor walkup in Washington Heights near Washington Bridge. Armando landed a job at Union Carbide where he worked in the copy department and rose to be a manager who oversaw a large group that included people with disabilities. He would work there until he retired in 1982. Once a month, a social dance was organized by the family in a basement and Armando would serve as the DJ, playing records so that his daughters and the youth of the community could socialize and have fun. Their daughters grew up and married. Elsa married Manolo and moved to New Jersey, Sylvia married Filiberto and moved to Florida with first grandchild Lisette when she was four. Seven years later, his second and last grandchild Janet was born. She had Down's Syndrome but was loved none the less. A week after their grandaughter Lisette married her husband Al in Miami n 1988, his wife Elsa unexpectedly passed away. This devestated the family. Armando soon packed up and moved to Miami to be with his family and there he remained the rest of this life. Elsita and Manolo soon followed. He lost his daughter Elsa to breast cancer in 2005. When Manolo came down with cancer he moved in with him to help take care of him until he passed. Armando leaves behind his daughter Sylvia Sanchez, his grand daughter Lisette Frevola and her husband Al along with his three great grandchildren Joey, Jon and Anna whom he loved very much. He lived a long life (103!) and was popular and well liked at Leon Medical Center where he went to socialize with his Cuban friends. He was sharp of mind, loved classical music and was so good at dominoes that we called him "the champion". He loved to brag about his age and a treasured memory was celebrating his 100th at the infamous Versailles Cuban restaurant with his family, wearing a specially made hat while felow diners wished him well. He will be missed! Thank you Abuelito for the sacrifices you made for you family to come to American and thank you for the love and memories made over the years. May you rest in peace.

Armando Gonzalez was born in Banes, Oriente, Cuba in October of 2017. He was the son of Antonio Gonzalez and Brigida Lopez and one of seven children. As a young man in Cuba he was a carpenter by trade and worked for an American company where... View Obituary & Service Information

The family of Armando Gonzalez created this Life Tributes page to make it easy to share your memories.

Armando Gonzalez was born in Banes, Oriente, Cuba in October...

Send flowers to the Gonzalez family.