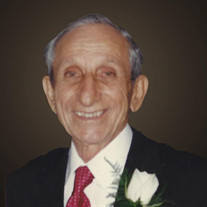 Anthony “Tony” Louis Snetro passed away peacefully at his home on October 12, 2021, two months short of his 104th birthday. He was predeceased by his loving wife Josephine (Jo) with whom he celebrated 65 years of marriage. Tony epitomized “the greatest generation” and was most proud of his family. “Poppi,” to his grandchildren and great grandchildren, took great joy in seeing them grow through the years and was an active part of their lives. Tony was a loyal, devoted friend to many, with an exuberance for life which he lived to the fullest each and every day, along with a work ethic that matched his generation. He was born in New Britain, Connecticut on December 19, 1917, one of seven children of Samuel and Angeline Snetro. During the Great Depression, he joined Roosevelt’s Civilian Conservation Corp. He enlisted in the US Navy during WWII where he served aboard the USS Boston in heavy combat in the Pacific. He was an original Plank Owner when the ship was commissioned. He remained a life member of the VFW and “USS Boston Shipmates,” attending yearly conventions with alumni of the ship. In 1956, he and Jo moved to Coral Gables where they raised their family and he began his 40-year career as a General Contractor building many custom homes in the Miami area. Besides being a life member of the Coral Gables chapter of the Knights of Columbus, he and Jo were founding members of Our Lady of Lourdes Catholic Church. Tony enjoyed many avocations. He was an accomplished self-taught trumpet player with a passion for big band and jazz. He organized his first band, “Tony and the Heartbreakers” which included his son on drums. He also played for many years with the Miami Dade Community Jazz Band. In 1995 his love of baseball was fulfilled by being a founding member of the “Young Viejos,” a softball team for over 65-year-olds at the Coral Gables Youth Center. Tony played short stop and didn’t hang up his cleats until he was 96 years old, many times pinch running for much younger men. Tony is survived by three children, Lauretta Fogg and her husband Alan, Tony Sinatra and his wife Donna, and Gail Snetro-Plewman and her husband Nicholas. He has seven grandchildren, Ashley, Trey, Ryan, Nicholas, Danielle, Sophia and Rebecca, and eight great grandchildren. He is also survived by his sister Rosalie Bond. The family would like to give special thanks to his caregivers, Luarene Sterling, Fabia Jack, Marcia Veargis, and Stephney Shannon. Visitation will be 3:00 to 5:00 pm on Sunday Oct. 24 at Van Orsdel Chapel, 11220 N Kendall Dr. A funeral mass will be held at 10:00 am on Thursday Oct. 28th at Our Lady of Lourdes Catholic Church, 11291 SW 142nd Ave., followed by a military internment at 1:30 pm at the South Florida National Cemetery in Lake Worth FL. Donations in his memory may be made to the Wounded Warrior Project, P.O. Box 758516, Topeka, Kansas 66675.

Anthony &#8220;Tony&#8221; Louis Snetro passed away peacefully at his home on October 12, 2021, two months short of his 104th birthday. He was predeceased by his loving wife Josephine (Jo) with whom he celebrated 65 years of marriage. Tony epitomized... View Obituary & Service Information

The family of Anthony Louis Snetro created this Life Tributes page to make it easy to share your memories.

Anthony “Tony” Louis Snetro passed away peacefully at his home...

Send flowers to the Snetro family.