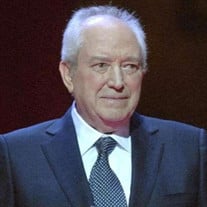 Our father and grandfather, Alberto Grimaldi, lived a long and interesting life, filled with courage, ambition, artistic vision, curiosity, travel, loss, and success. Alberto had a strong, restless, and tenacious personality, and he used his... View Obituary & Service Information

The family of Alberto Grimaldi created this Life Tributes page to make it easy to share your memories.

Our father and grandfather, Alberto Grimaldi, lived a long and...

Send flowers to the Grimaldi family.