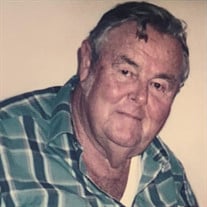 ROBINSON, Adolph H. “Buddy”, age 91, passed away peacefully on February 17, 2021, at the family’s home in Islamorada, Florida. Born in Clearwater, Florida, Buddy, his sister, and their parents moved shortly thereafter to Lemon City (Miami). Buddy met his wife, Joanne, in 1945. He graduated from Edison High School and enlisted in the US Marine Corps where he proudly served at Camp LeJeune, North Carolina. Buddy and Joanne married on July 19, 1952. He joined the City of Miami Fire Department and built their first house as well as home additions for customers on his days off. He later built a home for the family in North Miami where he and Joanne raised their two children, Elaine and Lee. He was a firefighter for 27 years and a General Contractor, but his true passion was saltwater fishing. Buddy and Lee were avid fishermen and caught countless billfish, yellow tail, mackerel, grouper, and dolphin. He built his retirement home in Islamorada in 1980 as well as several boats throughout the years and was proud of his enormous tomato garden. Buddy was larger than life, strong, witty, handy, creative, and a friend to all. Buddy and Joanne enjoyed their children, grandchildren, their many pets, and traveling. Buddy was predeceased by his wife of 66 years, Joanne, his parents, Jack and Marie, his sister, Margie, and is survived by his daughter, Elaine (Rick), his son, Lee, his grandchildren, Kathryn and Kevin, all of Islamorada, and numerous family members and friends. In lieu of flowers, donations to the Upper Keys Humane Society in Buddy’s name would be appreciated. Private graveside service.

The family of ADOLPH H ROBINSON created this Life Tributes page to make it easy to share your memories.

Send flowers to the ROBINSON family.